Where did the idea for your exhibition, Moana Currents: Dressing Aotearoa Now come from and how long has it been in the works?
Doris de Pont: It’s an exhibition I’ve wanted to do for a very long time. It’s been the aim of NZ Fashion Museum to look at New Zealand identity, what we wear and what that says about how we see ourselves in the world. Last year Dan mentioned wanting to do an exhibition on the Pacific influence in fashion and I said, ‘Great, let’s do it together’.

Dan Ahwa: Knowing Doris’ work with the NZ Fashion Museum, this exhibition was an opportunity to learn from someone I respect, who has contributed so much to the fashion industry. I’ve always admired the way Doris has framed the exhibitions and brings it back to New Zealand, so you can always identify with the curation.

What was it like collaborating on the project?
Dan: Doris is a really good collaborator. She said early on in the process, “Two heads are better than one.” It’s come along quickly since our first conversation and it’s because Doris is passionate about this particular subject and that has been a driving force. 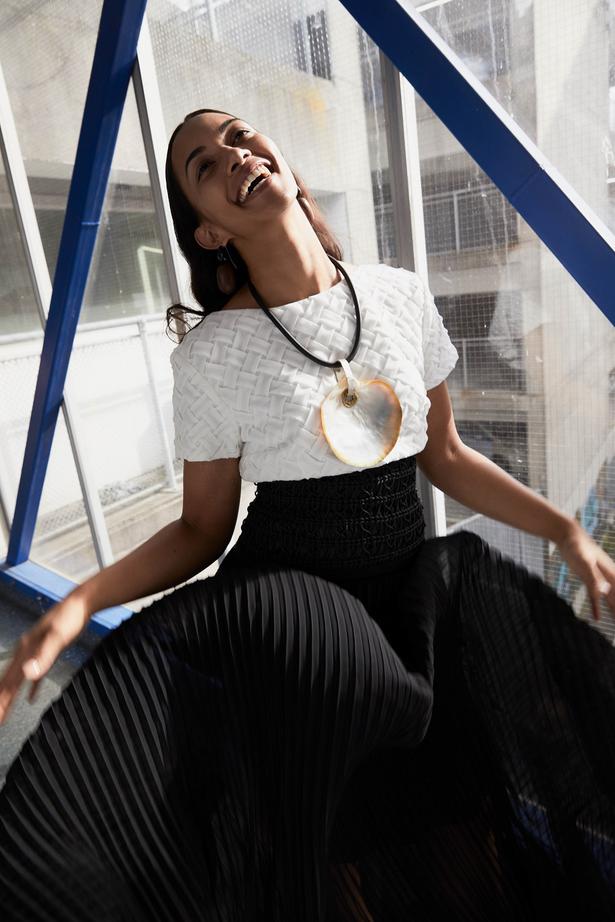 A key question you’ve posed with this exhibition is whether New Zealand’s Maori and Pasifika heritage has influenced the way we dress. Have you been able to answer that question?
Doris: We’re proposing some answers by showing garments where we read that influence. Other people might read something else. We’ve chosen garments specifically for the Pacific inflection in them. And when I say Pacific I mean all of the Pacific, so Maori, Polynesian, Melanesian and all the people of the Pacific, which is why it’s called Moana — it’s contemporary Moana people.

You’ve also been questioning what contemporary Aotearoa style looks like. How do you define Aotearoa style?
Doris: Aotearoa style is something that has revealed itself through some other exhibitions by the NZ Fashion Museum. In 2011 Black in Fashion looked at why New Zealanders have this obsession with wearing black and what that says about us. One of the strands in that exhibition was that we wear black because it’s easy, it’s comfortable and doesn’t draw too much attention. An exhibition at the Maritime Museum, At The Beach looked at the influence of beach culture on how we dress in New Zealand. The casual nature of how we dress — this idea where we might be at work but we’d rather be at the beach — we see that again in this exhibition. Comfort and ease and relaxation come through in the garments.

Dan: A lot of the selections we’ve made I can see myself in; it’s how I grew up dressing as a New Zealand-born Samoan. The garments speak to how we style our clothes now, the way we dress, our Sunday best and how that segues into the working week. It’s interesting to see how the designers in the exhibition answer that question with their pieces. Has there been an exhibition of this scale on Pacific-Moana style before?
Dan: I think the most recent was Pacific Sisters [Pacific Sisters: Fashion Activists, Auckland Art Gallery, March-July 2018] and that was quite a nostalgic exhibition for me. This exhibition is completely different because it’s looking at how we see ourselves now.

Doris: The Pacific Sisters inform how we dress today. They were hugely influential in the 1990s. This exhibition is looking at where we’re at today, where that’s taken us and where that’s led.

Are we seeing a resurgence in Pacific and Maori pride from a new crop of designers?
Doris: The Pacific Sisters were very radical at the time. They had to shake things up. And they did. A consequence of that is it’s become more integrated.

Dan: That’s the legacy they left. Doris used the word radical and it was so radical in the early 90s because you hadn’t seen anything like that before. Now it’s so ingrained in our culture and society to think that way. I think it’s up to the next generation to continue being visible and having their stories told through fashion, through music, through being creative.

Doris: Instead of having to stand up and shout, the aim is for that seamless integration. That it’s not even a question what your heritage is.

Why have you chosen to focus on contemporary pieces?
Doris: It’s the only way to have this conversation — to look at today in order to understand how we got there. Dan has interviewed the designers to see how they themselves are engaging with their identity and their positioning of themselves as New Zealand designers.

Dan: It really prompts questions about their own identity and what it means to be a designer in the Moana. They had to dig deep for answers so that was really interesting for us. 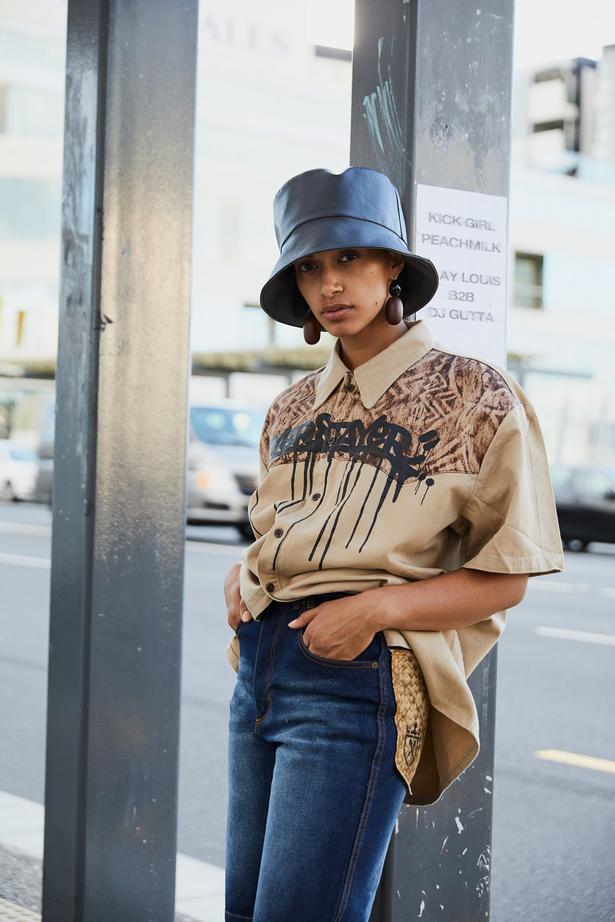 Why was it important to celebrate younger designers and who are some you can highlight?
Doris: One of the young designers is Tarita Georgia Rahui. I saw her work at a grad show. It immediately resonated with me as a piece that reminded me of Cook Island quilting.

Dan: Another great young designer is Keva Rands of Papa clothing. She’s creating a really cool community around the brand. It’s a mix of streetwear and a beautiful linen dress that harks back to the traditional muumuu dress; it has a lot of volume. It’s contemporary and you can see a lot of people wearing that dress over summer.

The show touches on a number of themes, including the use of heritage craft techniques such as stitching and weaving. You’ve chosen a piece from Karen Walker to illustrate this?
Dan: We have the strapless tivaevae gown she showcased at Buckingham Palace as part of the inaugural Commonwealth Exchange Programme, presented in front of the Duchess of Cambridge and Anna Wintour. It has a really great story. Karen worked with the Creative Mamas, a collective of Cook Island women who get together and celebrate tivaevae handiwork.

Doris: Tivaevae is a collective activity, so these women work together. I think it was about 1000 hours worth of embroidery creating the wool cloth, which is covered in floral motifs and made into a dress that just screams Karen Walker.

Dan: That’s a nice synergy with a brand that’s a household name and a younger generation that identifies with using this beautiful technique being passed down the generations; it’s a special piece. 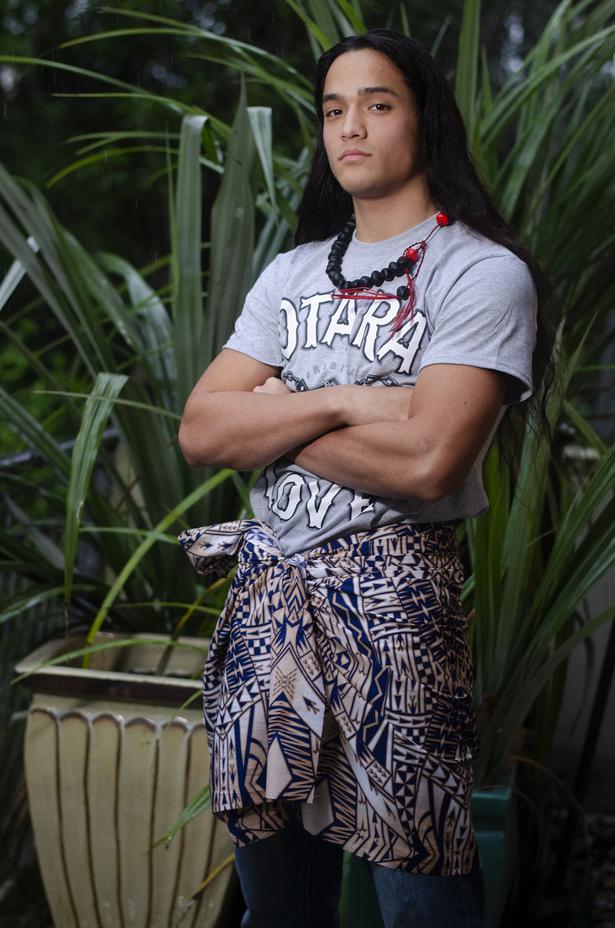 I was interested to hear there are some pieces from King Kapisi?
Dan: Growing up in the early noughties, the hip-hop scene felt stronger then, and as a teenager you’re still figuring out what your style is, and I identified with what he was trying to say. The Overstayer label was the first urban label picked up by an iconic department store, Farmers, which was ahead of its time.

Doris: Bill [Urale, King Kapisi] had some beautiful pieces that he’d kept and it’s great to have them because they’re the oldest items in the exhibition. What’s remarkable is how fantastic that outfit still is.

Dan: We also have Stan Tallon’s T-shirts in the show, which speak to the humour of the Pacific Islands. I came across his tees at Otara markets one morning.

Doris: He was one half of Pacifica Clothing in the late-90s. In that T-shirt culture there’s self-deprecating humour but there’s also expression of place. At the Grey Lynn markets you have the Grey Lynn T-shirt with the jandals, or the Onehunga T-shirt with ‘Paris, London, Milan, Onehunga’. It’s about expressing your identity on this really accessible garment.

Wrapping and structured dressing is a big part of Pacific fashion and you’ve included modern renditions of the muumuu by designers like Emilia Wickstead and Trelise Cooper. With cultural appropriation a big topic of discussion, do these pieces appropriate or celebrate and where is that line drawn in the sand?
Doris: This is the question I knew we were going to face. And this is the question that the exhibition is proposing for its audience. Is it appropriation or is it an homage? Do we own it now because it’s so much a part of our visual culture?

Dan: I think it’s that line, Dressing Aotearoa Now, that we always come back to because it informs the decisions we’ve made around the exhibition. We don’t want it to be purely about Pacific Island designers per se. What constitutes a Pacific designer? For example, Doris is a designer from the Pacific and her work has always celebrated our place in the world. It’s raising those questions and making people think a little bit more about our identity. What’s another piece in the show that you are excited about, Dan?
Dan: We have the Duk-Duk dress by Drew Douglas, a young Papua New Guinea designer based in Auckland. He’s created a beautiful cotton dress that features embroidery of the duk-duk. It was an homage to growing up with mothers and grandmothers who would pass on making skills, which I think is a lovely story.

Dan: I think that’s an important point. We live in a time of “buy less choose well, make do and mend”; there’s this whole upcycling culture, so it’s timely that we have those conversations.

Moana Currents is a three-part project, with the exhibition at Te Uru Gallery in Waitakere, an online exhibition at NZ Fashion Museum and a book. Tell us about the book.
Dan: It’s a chance to document everything and to talk to the designers about their pieces. Doris has written an essay, and I’ve written profiles with each of the designers and artists featured.

Doris: What’s fantastic about the book is the photography. We did photoshoots with Mara Sommer and Edith Amituanai, who received an MNZM earlier this year for services to photography and community. We have photos from Derek Henderson and some of the participating artists. So the range of imagery is stunning.

Dan: Mara takes beautiful images and they’re very much from the fashion realm. Edith comes from a personality realm, so they contrast brilliantly and it’s been interesting to see how they’ve interpreted the pieces. It’s available from the launch day in September.

What do you want people to take away from Moana Currents?
Doris: I’m sure they’re going to feel joyous, because clothes do that. The clothes are beautiful and relatable and fun. If you need your spirits lifted go to Te Uru and enjoy.

Dan: I want people to see themselves in the exhibition. That’s really important to me.