Stella McCartney is getting her own back. When her late mother, Linda, became the most famous vegetarian in Britain in the 1980s, the concept of a meat-free diet was greeted with derision and even outright suspicion.

But McCartney, who is at Cop26 when this interview takes place, was always a proud bearer of Linda’s credentials, and one of very few designers to go animal-free before it was fashionable. Two decades on, and this position is serving her well.

“They didn’t just not take us seriously,” she says. “We were ridiculed and laughed at — we were the butt of sitcom jokes. So, yeah, I feel excited and happy that the conversation has changed. I’m also proud: there’s a lot of work to do, but I’m passionate as hell.

“It’s pretty surreal for me to be here at Cop26. I certainly never expected to be meeting with these people at the centre of everything when I was a young fashion designer studying at Central Saint Martins.”

Although when you’re the daughter of Sir Paul McCartney, the corridors of power are never that far away.

In July, she addressed delegates including John Kerry at the G7 summit, and, at Cop26, she unveiled a Stella McCartney installation in Glasgow’s Kelvingrove Art Gallery.

Standing next to her were Prince Charles and Leonardo DiCaprio, two men even the most illustrious Parisian couturiers could only dream of getting on their front row.

Together, they walked around an exhibit that extols the virtue of the brand’s sustainable materials: vegan football boots, regenerative cotton, and handbags made from mushrooms. Prince Charles and Stella McCartney view a fashion installation by the designer during the COP26 summit. Photo / Getty Images

For a designer who needs customers to buy her clothes, McCartney is certainly critical of fashion and its consumption culture. She reels off statistic after statistic on the damage being done by clothing labels, and the desperate need for reform.

Most of all, she wants us to shop less but better. And though she doesn’t name names, she is clearly tired of being one of few brands willing to fully commit to sustainable practices.

“People just don’t know that fashion is one of the most harmful industries in the world,” she says. “Eighteen per cent of all greenhouse emission gases come from the leather industry — 18 per cent, just from handbags and shoes. It’s completely unregulated and we have no way of measuring our impact. We’re in a pretty dire situation, but what’s making it better is that this is a very fashionable conversation to be having. Yes, we have more work to do than most other industries, but we can get there, and what I want to say to designers is that if I can do it, anyone can.”

As woke as it sounds, premium brands know that mushroom-made bags and recycled-waste T-shirts can’t really compete against pony-skin, brushed leather or cashmere in the luxury stakes.

McCartney, of course, thinks that is changing. “Give it a few years,” she says. “If you buy a plant-based handbag, you’ll spend more now, but it’ll be far more valuable in the future when attitudes have changed, and that way, it can be handed down to your children and your grandchildren.”

McCartney turned 50 in September, but her outlook means she has far more in common with the under-35s than with her own generation. More than once, she mentions how much we have to learn from the young.

“They’re the future, it’s our responsibility to safeguard the planet for them. They’re also the only hope we have. They’re fighting for their right to have life on earth and if they have to sit on the street and make someone late for school or late for work then you know what, it’s worth it. I think the next generation is impressive.”

Lucky, really, as she lives with a lot of them. McCartney has a house in west London and second home in the countryside, and is married to publisher Alasdhair Willis, with whom she has four children.

When we discuss the issue of overpopulation, she has the grace to laugh at her own life choices.

“Oh God, well, I’ve got four children, so you can’t ask me that. That wasn’t very sustainable of me ... But I’m hoping that my children will do good and change the planet.”

READ: How Mindful Fashion NZ Is Guiding The Local Fashion Industry Through An Unprecedented Year

They’re already on the right track. I ask who is the most environmentally conscious in the McCartney-Willis household, and she pauses.

With her children already on side, next up is persuading her elite London friends to fly less, buy less and stop eating meat.

There has been criticism of the number of delegates who travelled to Cop26 in private jets, pointing to a general trend among the rich to discuss green issues at length while generating a carbon footprint that’s far largest than most. 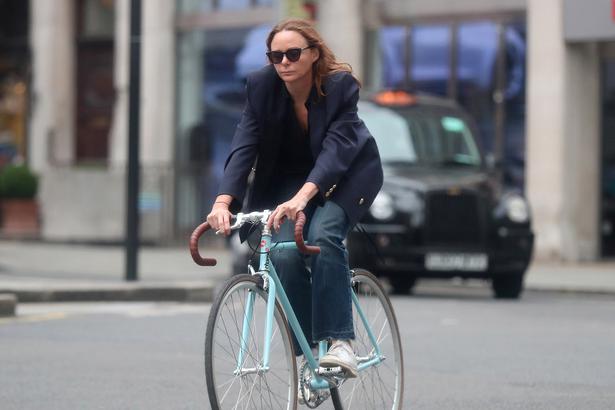 “We could all do better,” says McCartney. “I turn off all my plug sockets, I consume less plastic, but of course I sometimes think: ‘Oh c***, I just bought plastic.’ I am trying to do my best, like most people — and of course, I don’t eat meat, which is a massive head start.”

Her greatest ire is reserved for fast fashion. She describes it as the worst element of the entire industry and talks about the $500 billion of waste it creates every year, and about the slavery, the chemicals and the environmental damage generated by each £3 T-shirt.

She even wonders how fast-fashion bosses sleep at night. “It’s not the future,” she says, emphatically. “Resale, renting, vintage, charity shops, community ... that’s what the youth of tomorrow want.”

As she is about to hang up (Prince Charles and Leo are waiting in the wings), I ask about her father, and his new book, The Lyrics, in which he talks about fancying Queen Elizabeth, dating Jane Asher and, most of all, how much he loves his family.

“I think my dad’s new book is absolutely epic,” she says. “He’s done a lot of books, but this one is incredible. He blows my mind, I’m so, so proud of him.”

Given how hard she has worked to continue the legacy Linda began, McCartney no doubt feels the same way about his daughter.