When Leslie Hottiaux returns to France to visit her family, she arrives with a list of requests from her mother’s kitchen.

Home-cooked comforts such as a sweet and savoury stew of rabbit with prune sauce and red wine jus; pot au feu and veal blanquette; and duck, a lot of duck.

But the dish that makes her pine for home more than anything else is her mother Noella’s tomates farcies, a simple dish of Toulouse sausage-stuffed tomatoes.

“That dish is my mum,” says Leslie, who owns Apero with her partner, Ismo Koski.

In a word, the smell of the roasting tomatoes makes her feel “homesick”; there’s nostalgia, but it’s tinged with a touch of sadness that you are grown up and you don’t have your mum to cook for you.

Although the dish is uncomplicated and Leslie is an experienced chef, she just can’t seem to make it the way her mother does, who doesn’t really have a recipe, it’s just “a little bit of this, a little bit of that”.

“I don’t know what she does differently. I watch her and I see how she is making it and I think I am doing the same, but no. Maybe when you know how to cook you overanalyse it.”

The perfect kind of tomato to use is one at the peak of its season — juicy, but not so soft that it will split when you stuff it. 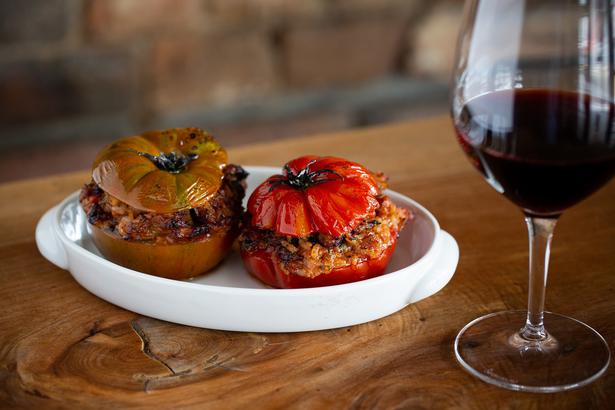 Onions and garlic are sauteed, then chunks of sausage meat are added to the pan and browned. The flesh of the tomatoes is scooped out and added to the sausage, along with some plain rice and herbs — parsley, thyme and Espellette pepper.

Once the rice is almost cooked, the mixture gets stuffed back inside the tomatoes and baked in the oven.

Leslie only likes to make this dish at the end of summer when tomatoes are their best and says you can also do it with courgette, capsicum or eggplant.

The menu at Apero is built on unfussy French classics much like this one, it’s food that focuses on quality ingredients used in their prime.

She once put it on as a special, made with courgettes stuffed with Apero’s own house-made sausage. “That was cool, but it doesn’t taste the same, even if it is exactly the same. It’s missing something, or because I know I made it, not my mum.”

READ: This Top-Rated Auckland Restaurant Has A New Head Chef

While no one in her family is a chef, Leslie says they love food and she grew up eating well. Her childhood summers were spent at her grandparents’ house in Brittany, where her grandmother taught her to bake cakes, and herbs and veges came from her grandfather’s small garden.

When she returns to France she likes to cruise the markets and enjoys cooking with things you can’t get here — like fois gras, decent duck and rabbit.

She says she’s lucky that she gets to see her mum so often, “I really love time with her, even if we aren’t really doing anything, just hanging out, it’s always special.”

They talk three or four times a week, and she visits once a year, when she always makes her tomatoes. “She likes cooking for me because she knows she only has to cook a few dishes and then I will take over and do the rest.”

Can a tablecloth make your food taste better? There’s science behind what makes a dinner party special — and it’s not just abou...