Growing up in the provinces of the Philippines, chef and co-owner of Nanam Jessabel Granada was foraging, pickling, preserving and sourcing food directly from the market since way before those things were trending.

She comes from a family of mango farmers in the town of Rosario, where the proximity to the ocean meant it was an almost daily ritual to pick up a nice fresh catch to make sugba fish — a dish that would be eaten under the trees with the workers, or outside by the fire at her family home.

She credits her father, Armel Granada, who is also a cook, for teaching her that simple cooking is the most memorable thing for people. "It doesn't need to be complicated, it just needs to be simple," she remembers him saying.

He would make sugba fish often. Whole fish is marinated with lots of garlic, rock salt and fish sauce, then stuffed with tomatoes, red onions and ginger, wrapped in banana leaves and placed in the coals of a fire. It's quick to make and served with rice and a squeeze of calamansi, a small piquant citrus fruit that everyone grows in their backyard.

"I remember the smell, the smokiness, the freshness of the steamed fish, the spice coming from the ginger, the sourness from the tomato, and the red onion is still al dente when you eat it. You just open it in the middle of the table and eat it kamayan (with your hands)." 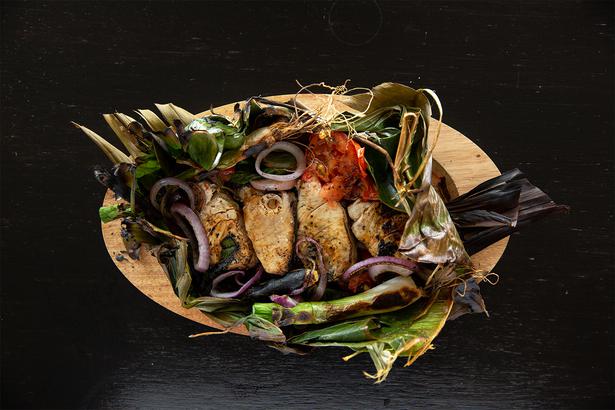 At Nanam last winter they made a version of the dish with salmon that was marinated with pickled cucumber and tausi (fermented black beans) that lent a saltiness to the fatty fish. Jessabel says people loved to use their hands to unwrap the banana leaf, and the fragrance that engulfed them as they did.

Jessabel says the growing population of the Philippines has really embraced cooking with instant food, but her dad has always taught her that nothing should come from a packet.

She explains that back home it was a privilege to have a fridge — she was 6 years old when she first saw one — so food was bought fresh daily and eaten before it could spoil. This also explains the depth of flavours that you find in Filipino food.

"When we say salty in the Philippines it's got to be salty because it preserves our meat without having to worry about having a fridge." This saltiness is balanced by a good dose of sour, with calamansi, kamias (like a long, very sour cucumber) and lots of vinegar and pickles.

Along with the tang and crunch of fresh young mangoes, Jessabel misses the daily routine of gathering food from the markets and her own backyard.

"In the provinces, you are taught to run around and grab your food from the outside of the house. When I was back home I didn't appreciate that was called foraging. We would just go in the forest near my house and take wild fruits or something. I realise now that it was quite a special thing to go and get your stuff for free and cook it fresh out of the garden."