“Have I talked about oats enough?” This isn’t a rhetorical question from Morgan Maw, whose passion for this nutritious, sustainable, earth-loving plant has led her to an exciting breakthrough after 10 years immersed in everything oats. This week she launches Boring Oat Milk, New Zealand’s first commercially made oat milk.

For anyone aware of Aotearoa’s current oat milk supply issues, this is a big deal. Morgan founded Boring Oat Milk determined to solve a head-shaking scenario that sees all New Zealand oat milk manufactured offshore, despite the fact that oats grow well here. She wanted to simplify this unsustainable international supply chain, which is susceptible to shortages, shipping issues and pandemics, not to mention the carbon miles and emissions from freight, by making it here at home.

New Zealanders are loving oat milk. We’re drinking 170 per cent more of it than last year thanks to its environmental credentials (it outperforms dairy and other plant milks in terms of water use and emissions), its subtle flavour and its perfect pairing with coffee.

Pick up any oat milk carton, however, and more often than not the fine print reveals that the oats are sourced overseas, with the manufacturing completed in Sweden. The Swedes are oat milk pioneers, having launched the world’s first and largest oat milk company, Oatley, in the 90s. The rest of the world is playing catch-up, using Swedish factories to produce local versions of the product, or just drinking Oatley, which is sold in 20 countries.

READ: How To Make Perfect Coffee At Home

“We’re a country that produces food,” says Morgan, “more than 10 times that of our population, yet we weren’t producing plant milk. It just didn’t make any sense to me.” She set out to change things, but it wasn’t easy — in fact it took three years to get to launch. Put simply, New Zealand hasn’t had the manufacturing capability to produce oat milk. Industry insiders told her it couldn’t be done.

“They said it was a niche product, that there wouldn’t be a demand for it, that it’s not going to take off.”

She also had people questioning why it would be her to find the solution. “Like who are you to go out and do this, if this is such a big thing, why would it be you? Are you qualified enough? But there’s nothing like a bit of motivation from feeling like the underdog to push you through.”

It’s a valid question — how has she been able to do what others couldn’t? “Because we just kept trying and didn’t give up. We all have our limits and business is tough and some people thought, ‘Let’s just get a product out there.’ They put it in the too-hard basket, but for me it was just a non-negotiable. And so I just kept trying.”

Morgan’s interest in oats is grounded in her “love affair with New Zealand and the environment. I always knew that whatever I’d do it would be something sustainable.” Oats are a great crop, she says, “they’re nitrogen-hungry and great to put into pasture that’s leaching nitrogens into waterways. They’re gentle on land and require little to no irrigation.” 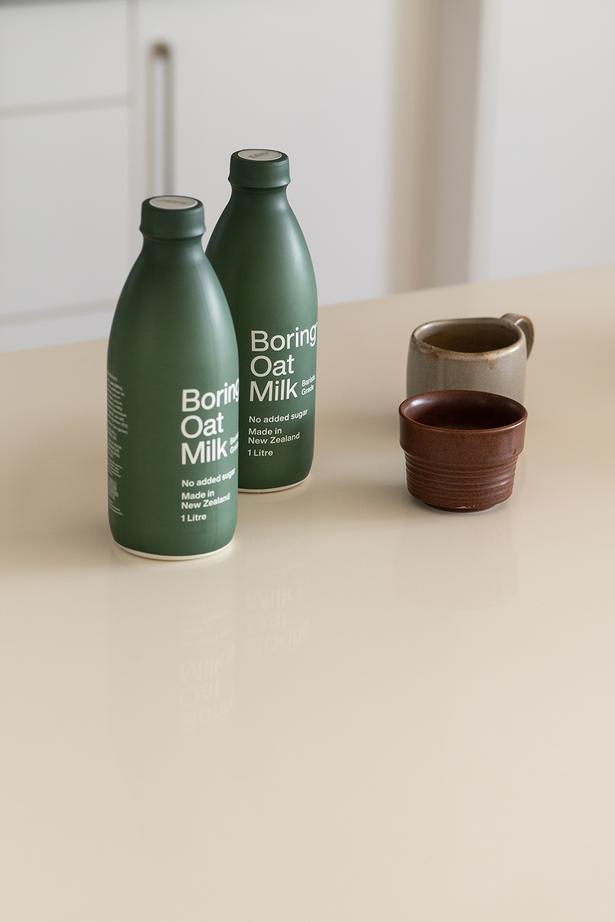 Morgan’s first business, Bonnie Goods, an artisanal oat cracker company she started in 2013, was the ideal training ground for Boring. She learned “everything the hard way”, feeling her way around the supply chain, packaging, promotions and pricing, dealing with supermarkets and customers. But, she says, it became pretty apparent that it was always going to be "a fancy cracker” bought once in a while as a treat. She wanted to find a way to have a positive impact on the environment — and grow more oats, which led her to oat milk.

Percolating in the background was her extensive knowledge of coffee, having worked in cafes while in high school in Taranaki and at Coffee Supreme’s Hopper St roastery during her marketing degree at the University of Victoria. She drew on her relationship with Coffee Supreme to stress test her new oat milk, ensuring it functions beautifully with coffee.

It’s taken three years to get to launch because everything has been a learning curve. From navigating the technical and logistically challenging process of turning oats into milk, to sourcing new manufacturing equipment, dealing with Covid-impacted supply chains, compliance issues and countless rounds of fundraising. “I’ve thought of giving up so many times.”

Morgan’s breakthrough moment came when she discovered Hawke’s Bay orchardists The Apple Press two years ago. She loved their ethos of turning apples deemed “too ugly” for selling in supermarkets into premium apple juice. “They’ve created this high-value product out of a fruit that commercially was seen as having little value.”

They also had a PET-compatible factory, packaging their juice in recyclable plastic bottles — a medium Morgan was keen to use for her oat milk, rather than ubiquitous Tetra Paks used to package the majority of plant milks. The Apple Press also had the ability to process liquid oat base at scale and were keen to collaborate.

Morgan called her company Boring because the process of making oat milk is “pretty dull — lots of staring at stainless-steel tanks” but her enthusiasm for the product makes it compelling. Her oats are sourced from Harraways just outside Dunedin, and grown in Southland and Otago. These whole grain oats are sent to a pre-processor in Napier to be turned into a liquid “oat base”.

READ: The Best Places To Get Your Coffee Fix In Auckland

Here, they’re transferred into a giant tank that “looks like a massive blender”, along with water and enzymes which are agitated by a big blade, allowing the enzymes to slowly release and break down the starch, “which releases the sugars and gives it that really nice, slightly sweet taste and creamy mouthfeel”.

A decanter separates the liquid from the solids, a thick porridgey substance that is donated to farms for pig feed. (Morgan is currently investigating converting these solids into a plant protein fit for human consumption.) The liquid oat base, which Morgan says tastes a bit like milk left over after your cereal, goes into a milk tanker to travel 1500m down the road to The Apple Press.

This is where the milk is fortified with calcium and B12, and nutrients, sunflower oil and salt added.

“The reason we use sunflower oil is that it gives it that really good mouthfeel, but it also helps it froth with coffee — you need that fat in there,” says Morgan. The milk is heat-treated and homogenised, then “the cool part, although I wouldn’t trust my measure of cool” — the bottles are blown on the line to a sterile 300 degrees, capped and sleeved, “and then you’ve got your oat milk”.

With the groundwork now laid, other locally made oat milks are sure to follow, and some are close. Otis Oat Milk, which was the first in New Zealand to make oat milk with locally grown oats, is in the process of building its own plant factory, and sending its oats to Sweden for manufacturing in the meantime.

“All power to them,” says Morgan. “Absolute respect for anybody who wants to build their own factory. It’s not an easy road and it’s a lot of work but New Zealand clearly needs it.”

It’s Morgan’s hope that New Zealand places more importance on plant-based alternatives as a form of future-proofing — and that it should be a collective effort. “I think we should be working together to build up the New Zealand oat milk brand, which is currently non-existent, so that we can have a really good export story and be able to sell across the world. I think the world’s a big place — why can’t we be the Southern Hemisphere version of Sweden?”

With Morgan driving that vision forward, it’s bound to happen.

Boring Oat Milk is available now at Farro and Moore Wilson’s, $5 for Boring Original, and $5.50 for Boring Barista, and will be in New World and Pak’nSave supermarkets later this month.