Eve Hewson as Adele in 'Behind Her Eyes'. Photo / Supplied Eve Hewson really hates “playing characters that are based on looks”. So much so, says the 29-year-old who has appeared in Steven Spielberg’s Bridge of Spies and Steven Soderbergh’s The Knick, that “whenever I read a script about ‘the most beautiful girl in the room,’ I actually want to puke”.

Whether it’s “the cool sexy girl” or “the pretty girlfriend or lover”, she’s “just not interested”, Hewson tells me over Zoom, from the London flat in which she’s currently locked down — until her US visa comes through and she can fly back to New York, her home for the past decade.

“Because if you sign up for those parts,” explains the daughter of Bono and activist Ali Hewson, her Americanised accent reverting to full-blown Irish as she picks up steam, “you’re putting yourself in a position where your job is to be attractive. Then you’re evaluated by the people who are hiring you, as to whether you are attractive ‘enough’ — which is a very weird position to find yourself in.

“Because you’re taking on the psychology of the middle-aged white men Hollywood studios are predominantly made up of, and what they think is attractive and their sexual fantasies and their sexual histories. If you look like their ex-wives or the woman who rejected them in high school, then that’s bad.” She shrugs. “And all that is way too much to take on.”

The recent Carey Mulligan versus Variety spat — which kicked off after film critic Dennis Harvey ­intimated that the British actress wasn’t attractive enough to play the femme fatale role in new film Promising Young Woman — is a perfect example of this, says Hewson. “And what was she supposed to do… apologise? Thankfully Carey got to shoot the movie and only had to deal with his opinion afterwards.”

Hewson didn’t have to take on any of that baggage for her new Netflix drama, Behind Her Eyes, based on Sarah Pinborough’s 2017 bestseller of the same name.

Her character, Adele, may be beautiful — a porcelain-skinned, glossy-bobbed show wife who wafts around in degrees of eggshell silk and chiffon — but she’s as complex and multilayered as they come. 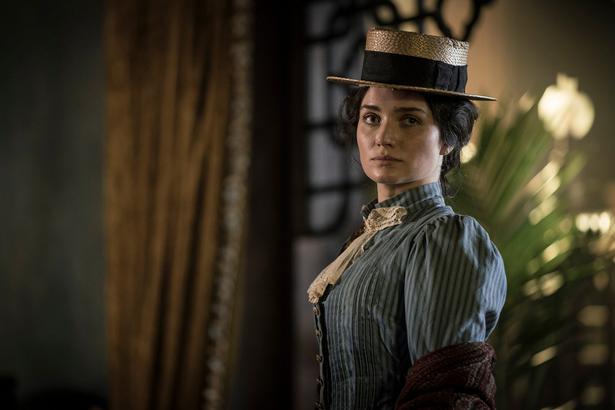 Indeed, it’s not until the final of the six spellbinding episodes — produced by The Crown’s Left Bank Pictures and written by Steve Lightfoot and Angela LaManna — that we find out Adele’s true motivations.

As the lonely and controlled wife of psychiatrist David (played by Tom Bateman), Adele is a figure of pity — at first.

The single mother she befriends is, unbeknown to her, not just her husband’s PA but his lover. And as her friendship with Louise (played by Simona Brown) intensifies, the love triangle deepens and the lies multiply, until we find ourselves questioning who is manipulating whom, before being floored by a final twist so unexpected it inspired its own hashtag on Twitter when the book was first published: #WTFthatending.

“Playing Adele was one of the most satisfying, cathartic experiences I’ve ever had,” Hewson tells me when I ask what is at the root of our apparently insatiable appetite for psychological thrillers such as Behind Her Eyes, HBO’s The Undoing, and Netflix’s The Stranger — and whether it’s as simple as watching people make deliciously bad choices from the safety of our sofas.

“It’s about living out the fantasies of what you wish you could do in the heat of the moment, whether that’s based around revenge or pain or despair,” she says, “and it’s sort of a healthy way to resolve those urges.”

Particularly now, in the limbo of lockdown, “it feels so exciting to watch things unravelling — things like that helicopter chase in The Undoing. In normal life we try to live within these carefully set out perimeters and shows like these are a safe way to let it all hang out.”

The themes in Behind Her Eyes — toxic female friendships, coercive control within a marriage and mental illness — aren’t just current, but important to portray, says Hewson. “Particularly with mental illness, it’s so vital that there are stories out there about the cycle and struggle so many people go through, and what it does to those around them.”

As the daughter of one of the most famous rock stars on the planet, Hewson is perhaps more aware than most of what she “puts out there”, and she catches herself a couple of times throughout our interview with apologetic caveats like “but I don’t want to generalise — and get clubbed on Twitter”. 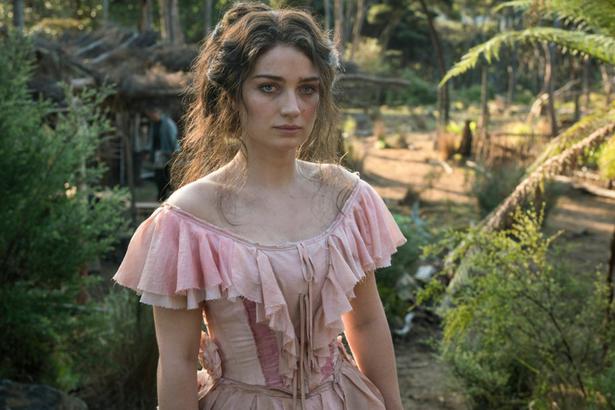 All too often social media can be reduced to “what people used to write on bathroom stalls,” she laments, “and so if you plug your name in, it will either be really positive or really negative, depending on the day you’re having and how you want to feel about yourself. I don’t think that’s healthy, and I really try to stay away from it.”

When she wasn’t travelling with U2 for months at a stretch and being privately tutored on the road, Hewson — the second of four children, with one elder sister, Jordan, 31, and two younger brothers, ­Elijah, 20, and John, 19 — had a relatively unexceptional childhood in sleepy Killiney Bay, on the coast south of Dublin.

Whereas her older sister was “the very outgoing, friendly and poised one,” she explains, “I was a tomboy sucking my thumb underneath the table, and not wanting to talk to anybody. But put me in an acting class and I would completely come out of my shell.”

It was a former tutor turned film-maker, Erica Dunton, who introduced Hewson to acting, and although her parents were initially concerned by her career choice — because of the additional scrutiny that any child of theirs might face, but also the rejection involved — they soon realised that she could handle it.

At first, having “grown up watching American comedies like Clueless”, Hewson auditioned “for a lot of American teen comedy stuff when I was 17, 18 and 19” but was told by casting directors that she was “just too European”. Though it was a blow, she says, “I remember my agent at the time telling me, ‘that will actually help you more than it’ll hinder you — but yeah, you probably won’t be in Bring It On 3’.”

Wise words. Because while “the more commercial mainstream people didn’t understand [me], it turned out that the more interesting independent film-makers really did.”

While studying drama at NYU’s Tisch School of the Arts — during which time her parents relocated to New York to be closer to her — Hewson won her first film role in Paolo Sorrentino’s This Must Be the Place, in which she was a goth teenager who formed an unlikely bond with an ageing rock star played by Sean Penn.

After that, she was cast as James Gandolfini’s daughter in Nicole Holofcener’s Enough Said, and a year later she took the role of nurse Lucy Elkins in Soderbergh’s HBO series, and memorably had to inject liquid cocaine into Clive Owen’s penis.

Then, in 2015, she played Tom Hanks’s daughter in Spielberg’s Bridge of Spies. But it perhaps wasn’t until her poignant performance as Anna Wetherell, an Irish prostitute, in last year’s lavish BBC adaptation of Eleanor Catton’s The Luminaries, that she finally shed her “daughter of” epithet.

Anyone still querying Hewson’s talent or range is proved wrong by her nuanced and artfully underplayed performance in Behind Her Eyes.

But in any case this young actress is too focused on her next step to care about those intent on dismissing her as another rock star’s child with lofty ambitions.

“Acting was my absolute obsession when I was a teenager, but now that I’m almost 30 and I’ve worked with such good directors and learnt so much about directing, that’s something I really want to try.”

She credits “women like Reese Witherspoon, Nicole Kidman, ­Margot Robbie and Kerry Washington” for giving her the confidence to believe that a move behind the camera is possible.

“They’re all taking the power back, and that’s definitely influencing my generation of female actors. Being able to make my own decisions and develop stories that I want to tell would mean everything to me.”

And there’s one story Hewson already has in mind — the one Dr Kay Redfield Jamison tells in An Unquiet Mind: a memoir of manic depression by one of the biggest US authorities on the subject. “It’s one of the best books I’ve ever read on mental illness,” says Hewson, “and I would love to bring that to the screen.”

In the background, Hewson’s doorbell rings — it’s a delivery of equipment for one of the virtual photoshoots she is still trying to master — but before I leave her to it there’s one last thing I’m curious to know.

Given everything she learnt and witnessed about fame growing up, did no part of her want to remain concealed in the shadows?

“To be honest, I was never going to have my anonymity and be a regular Joe,” she says after a moment’s pause. “I was always going to have eyes on me, whatever I did, so it’s been great to build my own identity and my own career and feel like I’m an individual now, as opposed to a part of something or someone else. But I can’t lie: the idea of this show airing all over the world does make me really nervous.”

Because it will take her to another level? “Maybe.” On the plus side, I say, it may also take her one step closer to the day her father gets asked: “Are you Eve’s father?” Hewson bursts out laughing. “You know what? My dad’s always saying, ‘I can’t wait for that day to come’.”