Whether you fancy hitting the water or the road, here are a few cool day trips to tackle this summer

Explore Rotoroa Island’s Beauty And Fascinating History
Avoid the hordes on Waiheke Island this summer and increase your Hauraki Gulf exploration with a trip to one of the other islands we’re lucky enough to have on our doorstep. Rotoroa is one worth setting aside a full day or even an entire weekend for — bought by the Salvation Army in 1907, the island was used as an addiction treatment centre for nearly a century. The Rotoroa Island Trust, which now leases the island from the Sallies, reopened it to the public in 2011 and has worked hard on the various walking tracks, public artworks, conservation of endangered birds and planting of native forest to help regenerate the island. The island, a 75-minute ferry ride from downtown Auckland, is home to many historic buildings and four lovely beaches; note that you have to take all your own supplies with you as there is no shop. 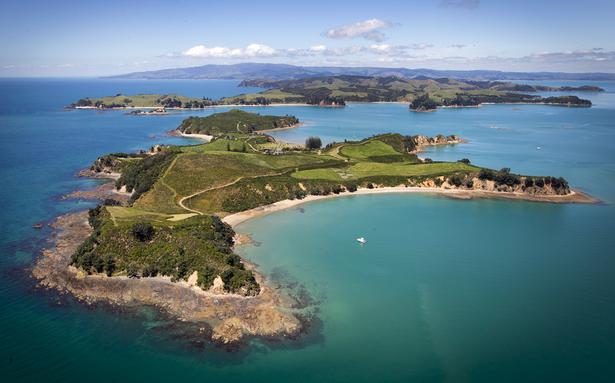 Tootle Out To Clevedon
The pretty rural Auckland township of Clevedon, 35-40 minutes southeast of the city, is worth visiting for its two Sunday markets alone — a farmers’ market at the Clevedon Showgrounds from 8.30am-1pm, and a general village market at the Clevedon Community Hall from 9am-2pm. The latter is great for a rummage and you’ll likely come away with some handcrafted treasures and perhaps some fresh preserves. New to the area is Hallertau Clevedon, a new outpost of the popular Riverhead brewing company and restaurant which has taken over the old Clevedon Hotel. The fresh refurbishment includes an extensive biergarten which looks to be an ideal place for whiling away a sunny afternoon.

Catch The Ferry To Riverhead
Ditch the car for the day and jump on board the Riverhead ferry, the MV Kawau Isle, for a leisurely 90-minute cruise to one of the city’s oldest pubs, The Riverhead. Leaving from downtown Auckland, you’ll journey under the Auckland Harbour Bridge and pass by the Chelsea Sugar Factory, the Hobsonville Airbase, Herald Island and the Huapai Golf Course on your way to the historic tavern which is around 150 years old. A couple of hours later, after enjoying something to eat and a few bevvies over the water, you’ll head back to the city.

Kayak The Puhoi River
Give your guns a workout with a pleasant paddle 8km down the scenic Puhoi River with Puhoi River Canoe Hire, departing either from charming Puhoi Historic Village or beautiful Wenderholm Regional Park depending on the tide. The two-hour journey on flat, calm water through farmland, native bush and mangroves is unguided and drop-offs are provided to get you back to your car. Along the way you’re likely to spot herons, pukekos, kingfishers and maybe even kookaburras. All gear is provided, and work in some time either before or after your kayak for a beer and a fish burger at the excellent Puhoi Pub. A refreshing dip in Lake Waimanu is just reward for walking the track to its shores. Photo / Supplied

Trek To Lake Wainamu at Bethells Beach
Known by locals as the ‘Bethells Lake’, a swim in Lake Wainamu is just reward following the trek to reach it, either along the stream or up and over some massive sand dunes used by Auckland sports teams for training. From the Lake Wainamu carpark on Bethells Rd, you head east along the track. After sweating it up for about 30 minutes you’ll get to the freshwater lake at the foot of one of those massive black dunes and be ready to throw yourself in its refreshing waters. If that’s not enough for you, you can keep going right around the lake for another hour or so during which you’ll pass by Waimanu / Waitohi Falls. Before or after your walk, stop by The Bethells Cafe foodtruck in Te Henga Park for something delicious to eat and drink.

Meander Around The Awhitu Peninsula
Pack the car full of snacks and head 75 minutes southwest to Auckland’s Franklin district where you can visit the historic Manukau Heads Lighthouse, one of the few in the country open to the public. The Awhitu Peninsula is also home to a regional park packed with mountain bike and walking trails, and the beaches you’ll encounter along the way will either be pretty white sand (Clarke’s Beach, Orua Bay) or dramatic black sand (Kariotahi). You’ll also find a winery with beautiful clifftop views (Awhitu Wines) and on the last Sunday of every month at Matakawau you’ll find a happening country market. If you want to stay the night on Rangitoto Island, there are baches available to rent. Photo / Supplied

Climb To The Summit Of Rangitoto Island
Another of our Hauraki Gulf treasures is Auckland's most recognisable icon, Rangitoto Island, which you can get to by public ferry, a two-hour kayak from the North Shore or by private boat — or if you're really short on time, there are helicopter and seaplane options too. Once on the island, the walk to its summit takes around two hours return, covering an easy 7km through pōhutukawa forest and lava fields. At the top you'll be rewarded with panoramic views of Auckland and the Hauraki Gulf. There are accommodation options too if you fancy staying for the weekend.

You and your pup need to hit these top dog-friendly parks, trails and beaches in the city