The Vision
Saru: Basically we wanted to have a good time. To us, that meant a big party with good food, good music and good company.

Traditions
Samir comes from a big Lebanese family and I have Tamil/Sri Lankan heritage so we wanted to honour both our backgrounds. A few days before the wedding I had my hands adorned with henna. I walked down the aisle to a Tamil love song and Samir’s aunt did a reading in Arabic at the church. My dad also performed a pooja (prayer ritual) at the reception, blessing us. Throughout the day we remembered our ancestors and heritage.

We also wanted to honour aspects of our own parents’ weddings. We had a croquembouche as our wedding cake, just like my parents. We left the church to All You Need Is Love by The Beatles, just like Samir’s parents. 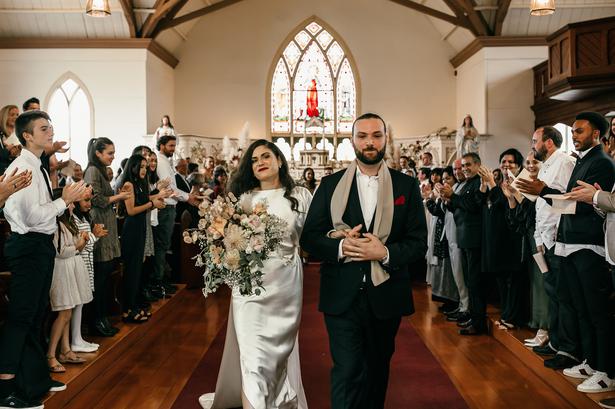 The Ceremony
We had our ceremony at St Mary’s Old Convent Chapel. Samir’s family are Catholic so it was important that we got married by a priest, in a church. The priest who married us suggested the chapel, which is a sweet, historical building on the grounds of St Mary’s College.

The Reception
Our reception was at The Glasshouse in Morningside. We struggled to find a venue to accommodate our large guest list. It seemed the only options were soulless hotels or way out in the country. The Glasshouse ticked our boxes because it’s close to central Auckland and provided a lush garden setting with the benefit of being indoors in case the autumn weather turned.

We had two long rows of tables at the reception, each named after a special place to us. We didn’t want to be isolated on a bridal table so we sat in the middle. Samir’s uncle Matt was the MC and kept everything running at the perfect pace. Samir and I both changed into sneakers after the speeches finished and spent the evening bouncing from the photobooth to the dance floor to the courtyard. It was a beautiful blur. 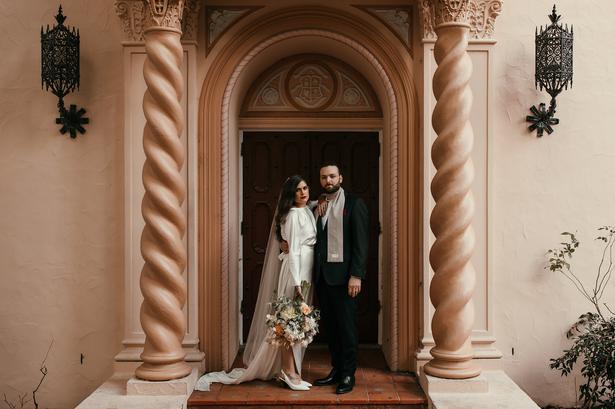 Samir wore a sash, inspired by a photo of his father on his wedding day. Photo / Haley Guildford

The Rings
Samir secretly spent months designing my engagement ring, taking my sister along to appointments at Naveya & Sloane. I was oblivious, even when one of my rings showed up where it shouldn’t be. The main stone is a Ceylon sapphire, a tribute to my Sri Lankan heritage. My wedding ring is also from Naveya & Sloane, a simple gold and diamond band with a tiny sapphire secret spark, tying it back to my engagement ring. For his wedding ring, Samir chose a thick silver band from Meadowlark. 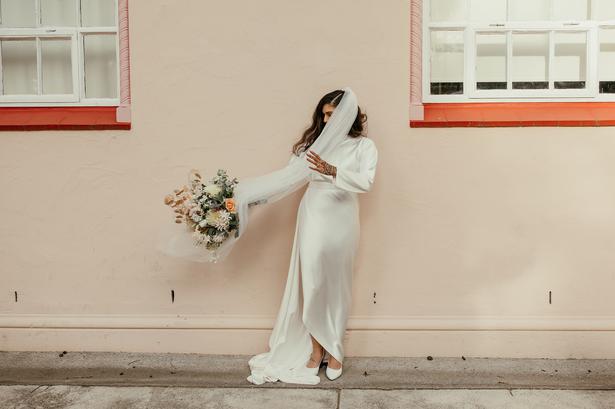 The Dress & Suit
I was lucky enough to have Kristine Crabb create my dress before Miss Crabb closed its doors. It was made from the most luxurious ivory silk satin with a train and long sleeves. Before the reception started I tucked the train up into the waist tie, ready for dancing. Our friend Florence (@rescuedxrence) also painted a beautiful leather jacket for me using the same lotus flower imagery that we used on our invitations.

Samir wore a navy Working Style suit with a crisp white shirt. Samir is very casual, so no tie was a natural choice. He also wore a sash around his neck, inspired by a picture of his dad on his wedding day. A deep red pocket square matched my lipstick. Bridal Party
The bridesmaids wore silky Miss Crabb slips in different colours. They chose their own jewellery, shoes, makeup and hairstyles. It was important that everyone looked like the best versions of themselves, not carbon copies of each other. The talented Laura Williamson (@laurawilliamsonmakeup) did our makeup and my dear friend Chantelle Woodward (@chantellewoodwardhair_) did our hair. The groomsmen wore Working Style, with smart navy pants and subtle pinstripe shirts. They each wore a sash, like Samir.

Entertainment
Andrea Orani (@andyheartthrob) was our DJ. We used to work together back in the day at Hell Pizza (where Samir and I met), so it was a cool full-circle moment. More than one person said it was the most lit dance floor they’d ever seen at a wedding. The Flowers
Nima Nikkah from Event Impressions was our florist. The florals he created were a highlight of the wedding. Big, bouncing arrangements of dahlias, hydrangeas, proteas, roses, toetoe and all sorts of greenery filled the church, reception and our hands. I loved my bouquet so much I dried it and kept it.

The Photos
I found Haley Guildford via Instagram and love that her style is the perfect mixture of candid moments and thoughtful posed shots. I was advised by other newlyweds that you usually only really love a couple of photos from your wedding day, but with Haley’s pictures it was hit after hit.

The Organisation
Having a wedding planner is a luxury. It made sense to do as much as we could ourselves. I think it would’ve been slightly easier if we had longer to organise it. Our engagement was only 10 months, so it felt like we were working overtime to get everything sorted. 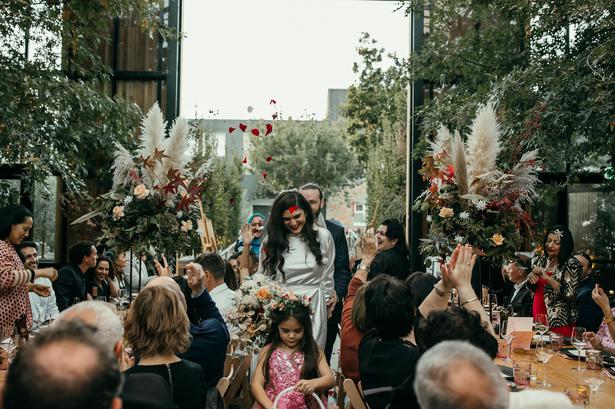 The Hen's Do
I was deathly afraid of having a hen’s do. Turns out I had nothing to worry about because my bridesmaids organised my dream event. We started off with champagne and cheese at my parents' place, enjoyed a three-course feast in Coco’s Cantina’s private dining room, followed by themed cocktails at my house. I’ve never really understood the girls-only aspect, so all my friends were there, regardless of gender.

The Stag Do
Samir: We had breakfast at cafe, and then went out to Piha for the day. Afterwards, we went to my house to play poker and eat pizza and chicken wings. It was chill.

The Experience On The Day
Saru: It was truly surreal. It went by so quickly. We were both incredibly nervous beforehand but as soon as we saw each other, a sense of calm came over us and it was just bliss. Flowers from Nima Nikkah were a highlight. Photos / Haley Guildford

Surprising Moments
Our friends surprised us by performing a haka after the speeches. It was a powerful, humbling moment.

The Food
We had a family-style meal, with everyone sharing food and breaking bread like they would for a meal at our own home. We wanted the meal to be relaxed so we avoided anything fancy or over-complicated.

We chose a menu of simple, honest food like roast chicken and lamb, potato gratin, prawns and salad. Urban Gourmet did the food, service and set-up and they nailed it. We also had a dessert table with baby cakes from The Caker and Lebanese sweets. 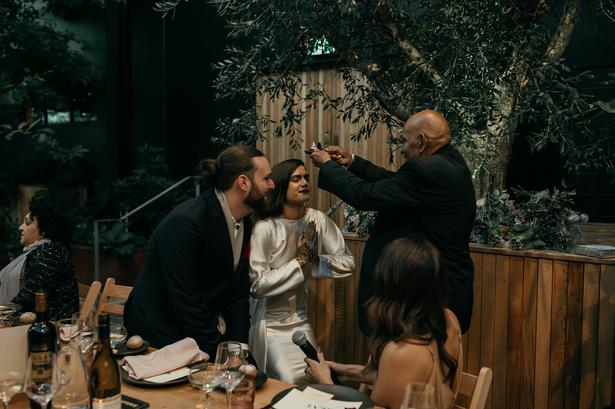 Honeymoon
We left the day after the wedding for our honeymoon, just like in the movies. We were hungover, tired and a 12-hour plane ride was the last thing we felt like. Luckily, we had entered a bid with the airline which was thankfully accepted so we were able to travel business class to Malaysia. In Penang we slept, swam, shopped and ate (a lot). We also went to Bangkok especially to go to Gaggan, a two-Michelin star restaurant that specialises in progressive Indian cuisine.

Some Advice
Make sure to take some time out when things start getting hectic. Make sure you have a proper run sheet for the day. We made a real effort to map things out, which made everything flow smoothly.

For Lini and Luke, the Kelliher Estate on Puketutu Island was the perfect venue for their special day

White On: Pearlescent Products To Add To Your Bridal Beauty Arsenal