If I asked you to conjure up an image of an author on a book tour, what would they be wearing? An ill-fitting suit in a nondescript dark shade? A beige cardigan, perhaps?

READ: Six Simple Ways To Transition From Home To Office In Style

Why? A book tour calls for a certain kind of power dressing. One that says: “I am an unshakeable authority” and also: “I am warm and approachable — buy my book!”

Becoming, currently on Netflix, follows lawyer and former First Lady Michelle Obama on the 2018 book tour for her memoir of the same name. The documentary has two stars: Michelle and her “tourdrobe” (oh, and Barack). Because, unlike Clinton and Sandberg, Obama isn’t afraid of her interest in fashion being held against her. 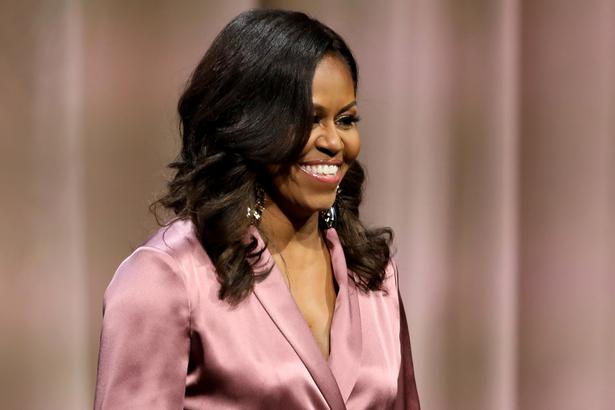 This is rock star-selling-out-Wembley territory — and that’s exactly what her book tour is: a stadium-filler. If the clothes are more what you’d expect of Beyonce or Celine Dion, then that’s a conscious choice. Michelle, her stylist, Meredith Koop, and tailor, Christy Rilling, embrace megawatt star power.

“When I look at this suit I do see Elvis — and I don’t have a problem with that,” says the stylist at one point — she could be talking about any number of Michelle’s suits. Perhaps one of three black iterations: one trimmed with sequins, another rhinestones, another a trailing web of crystals. A blush-pink suit also gets the crystal treatment; another is fully metallic, a disco-era nod in silver-blue.

Trends — so easy to get wrong, so normally avoided on these occasions — are front and centre: a striped pyjama suit, a denim Karen Walker suit (pictured), another heather pink with rope belt. And then, that final break from accessibility: a pair of £3000 holographic gold knee-high Balenciaga boots. At one point in the documentary, Michelle gathers her team together into a prayer circle — just as Jennifer Lopez did before performing at the Superbowl in February. The crowds that gather for the former are just as adoring as the latter’s.

As First Lady, Michelle understood more than many exactly what was expected of her. She became a face of continuity and reassurance, though an unmistakably — perhaps unavoidably — fashionable one. She’s no stranger to a carefully considered tourdrobe, each piece weighed for possible meanings; never forget the angry headlines that followed Melania Trump’s numerous fashion missteps — the jacket emblazoned “I really don’t care, do U?” worn on a visit to migrant children, the stilettos she wore to board Air Force One en route to see the havoc wrought by Hurricane Harvey.

Jacqueline Kennedy was a fashion icon, but her clothes were American-made replicas of the French ones she loved, from Chanel and Yves Saint Laurent. Technically patriotic, then, but begrudgingly.

Michelle, on the other hand, championed young American designers during her husband’s tenure, using her influence to boost the country’s fashion businesses (reportedly by $2.7 billion for each of his years in office) and often making relatable, “normal” choices, as the Duchess of Cambridge does so well.

But those £3000 Balenciaga boots marked a shift: Michelle is not aiming for “she’s just like us” accessibility anymore. Nor is she standing back to let her husband lead the way.

She has become a beacon of possibility for women and young black women in America in particular. Her wardrobe is contrived to underline her successes, her wealth and her power, in a way that only an unapologetic superstar wardrobe could. At the time, Obama said there was no hidden message behind the boots. Not a hidden one, then, but an overt one: success.

We like to think that power dressing has come a long way from shoulder-padded black trouser suits and stilettos. But actually, the principles are the same — the shoulders are just a little softer and the colour palette more sugary than severe; this is Soft Power Dressing — palatable persuasion over force.

READ: The Politics Of Fashion: How Whetu Tirikatene-Sullivan's Pioneering Style Paved The Way For Politicians Today

On the front cover of Becoming, Michelle’s portrait is a near-exact copy of Sheryl Sandberg’s — leaning towards the camera, head resting on the right hand — with two small differences: first, while Sheryl’s conservative V-neck white blouse is chosen to recede into the background, Michelle’s blouse — also white — is pulled down off the shoulders — “A little pinch of post-White House edge with that sexy shoulder,” Christy Rilling said at the time.

Secondly, instead of Sheryl’s tasteful-and-understated stud earrings, the sort that the Daughters of the American Revolution might wear, Michelle is wearing a large pair of hoops. When Alexandria Ocasio-Cortez was sworn into Congress wearing hers, she tweeted: “Next time someone tells Bronx girls to take off their hoops, they can just say they’re dressing like a Congresswoman.”

A pair of earrings, then, or a political statement? Michelle’s rock star tourdrobe isn’t about ego: it’s about power and taking up space.