Regular sexual activity between couples is on the decline. Fewer than 50 per cent of men and women aged from 16 to 44 have sex at least once a week, according to a recent study in British Medical Journal, and the steepest decline is among those who are living together, and the over-25s.

So, I ask Alessandro Michele, Gucci’s innocent-savant creative director, is this at least partially down to him? After all, the demure, geeky aesthetic he introduced to Gucci when he took the helm five years ago, in one stroke did away with the tired vamping that had started in such high spirits when Tom Ford was in charge in the 90s. Michele wasn’t about cleavage or pussy pelmets. He was interested in kooky primness: layers of ruffles, pussycat bows, golfing twinsets, oversized jackets, tank tops ...

And it all proved to be wildly successful. Annual turnover increased from just under $6 billion in 2014, the year before he took over, to $15.4 billion in 2018. The nerdy Gucci misfit with oversized glasses, pudding-bowl haircut, genderless body and questionable colour sense was copied by everyone, from Michele’s high-fashion peers to bargain-basement chains. 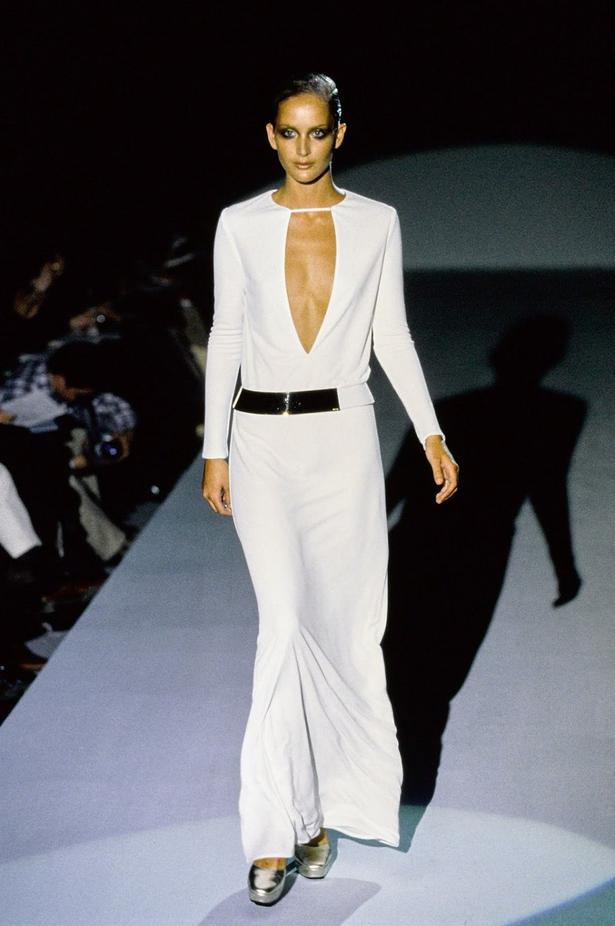 The hype was boosted by pervasive ad campaigns, celebrity endorsement and social media, which gives minority and niche points of view disproportionate weight.

With his flowing black hair and eccentric eclecticism the bejewelled, gentle Michele is his own best ambassador for Gucci style.

While I don’t seriously think we can hold him responsible for the worldwide decline in sexual activity, he was, by a huge stroke of luck for Francois-Henri Pinault, chief executive of Kering, the group that owns Gucci, the right man at the right time to articulate the sudden uprising of the LGBTQ+ movement.

The increasingly tawdry sexuality that Gucci had been projecting before he took charge was old-fashioned enough in 2014. After the #MeToo movement took off, it would have looked moribund. Even Miuccia Prada, that arch originator, demonstrated, inadvertently perhaps, that she has caught the Gucci bug in her show last Wednesday. Michele was surprised to see his idol referencing him. “I grew up with Prada,” he says.

Michele, who says he doesn’t look at anyone else’s work, had seen pictures of Prada’s show the previous day. He is not the type to start a fight, however. “We [designers] have to work so fast nowadays, it’s not always easy to stay true to yourself,” he says, rather diplomatically.

That doesn’t mean you have to keep riffing on the same refrain — an accusation that has been levelled at Michele lately. The pile-up of textures, pattern, colours, lace, ribbons and ruffles that charmed everyone in the beginning had begun to look samey — although the retailers still loved it because it gave them such a variety of merchandise to choose from. But Michele has never pandered to economics. What matters is creative integrity. “Even I’m getting bored with the things that I do,” he says disarmingly. 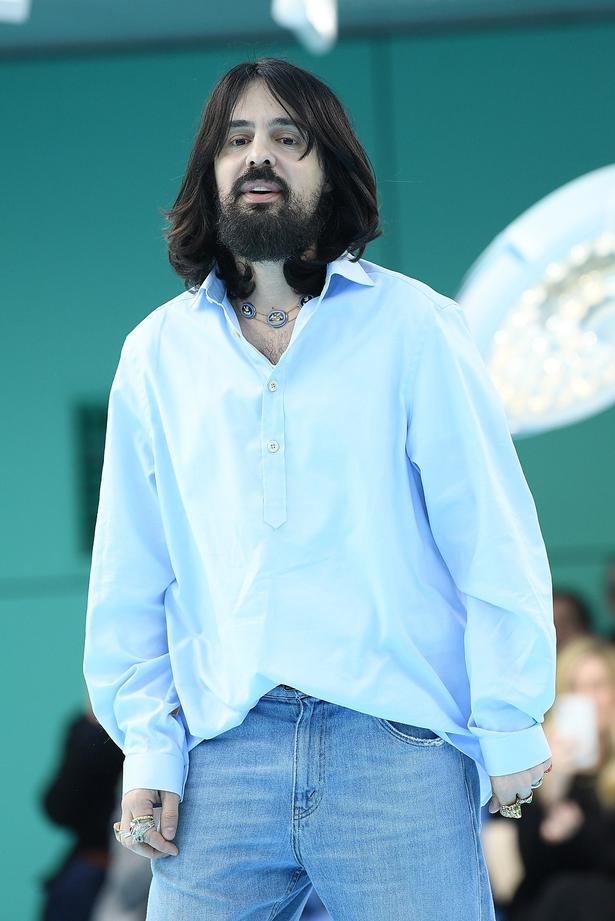 So for Gucci’s latest show, he pared everything back, including the theatrical dry-ice effects and camera obscura lighting that made it hard to see the models, and even harder to decipher all the layers, in seasons past. The models came out on to the catwalk travelators in unbleached tunics, straitjackets and trousers. It was a clear message that the brand, if not going minimalist exactly, was changing tack.
It wasn’t all cream calico, though. Michele’s love of retina-rousing colour was still in evidence, as were all those 70s silhouettes, albeit toned down. But the models were carrying riding crops and fetish toys. And those looked as out of place on Michele’s catwalk as they would be at the Queen’s garden party.

“I began to wonder what would happen if my nerdy crew got sexy,” he responds simply. “I mean, I’m not a sexy guy but there are lots of ways to be sexy. Including quirky ways.”

Gucci’s most interesting moments, he says, were in the 70s and the 90s, when Tom Ford was in charge. Ford was, for years, Michele’s boss at Gucci. But Ford’s reductive view of sex, in which the Gucci women wore plunging crepe column dresses and tight velvet trouser suits, and — in one notorious ad campaign — nothing but a double G logo topiaried into their pubic hair, is very different from Michele’s cross-dressing, gender-fluid waifs.

“I’m obsessed with Tom Ford’s Gucci,” he says. “That’s the soul of Gucci for me.”

The show was controversial, although it wasn’t the whips that provoked certain sections of the audience, but the straitjackets. Ayesha Tan Jones, a non-binary musician, artist and activist who modelled in the show and had personal experience of mental health issues, raised their palms to the phalanx of photographers. On them were scribbled the words “mental health is not fashion”.

Thanks to the deathly pace of the travelator, everyone got to read them. Insurrection from within the ranks — this is a new hazard for designers, who are increasingly wrong-footed by today’s tinderbox political and social issues. 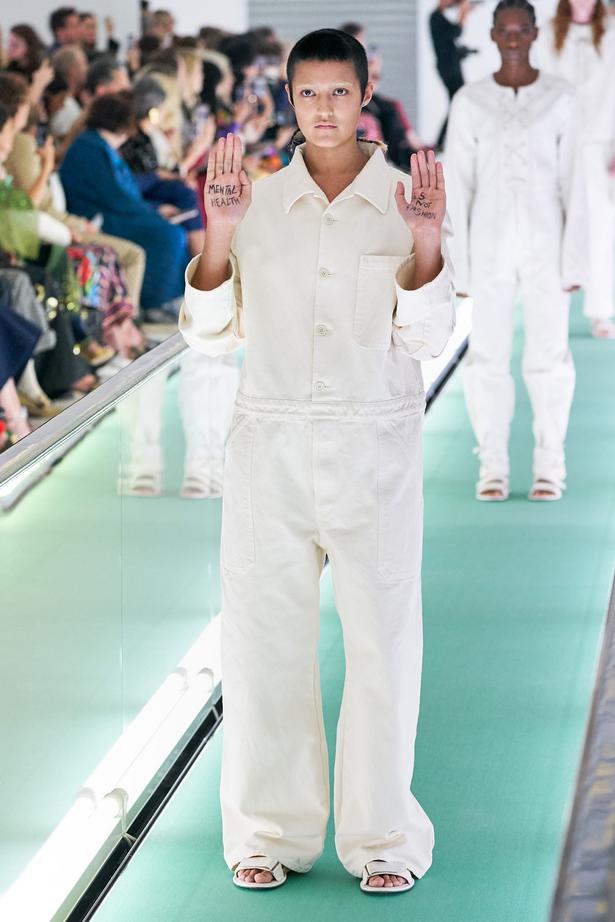 At the end of last year, Michele, formerly a poster boy for minority groups, got his first taste of righteous wrath when a high-necked black jumper with an in-built balaclava and a crimson slit cut for the mouth sparked #gucciblackface outrage on social media. The furore shocked him.

“I didn’t sleep and I didn’t eat.” Not because he was thinking about his career. His two bosses, Marco Bizzarri, chief executive of Gucci, and Pinault, are remarkably supportive. “Francois-Henri always says to me: ‘Whatever you do, don’t stop taking risks.’” Instead what worried him was that he’d been misunderstood. “I’m not racist at all. But now I can see that I was ignorant. I didn’t see it because I didn’t know [what I was looking at].”

Perhaps as much as its cleaned-up aesthetic, Gucci hoped to promote its clean air credentials with this show, its first to be billed as carbon-neutral. While there is a huge amount to be done with the entire fashion show system — the surrounding streets of every show in every fashion capital are a log jam of nose-to-tail limos — Kering is deadly serious about sustainability, says Michele.

The luxury conglomerate is more than on target to meet its stated aim of halving greenhouse emissions by 2025. Plastics are banned. Dyes are changing ... “You can do it and still expand your business.”

And that’s another thing he’s learned in the past few years. “I thought Kering was obsessed with a problem that didn’t exist when I first came to work here in the 90s,” he said. “I was so ignorant.”

Will straitjacket-gate eclipse the eco glow around this show? Can Michele retune the Gucci magic? (Sales in Asia are still increasing at 23 per cent a year but have dropped off slightly in Europe.) Let’s hope so. Alessandro Michele is a force for good.