Lucky Ponsonby is next in store for a sprinkling of Satya’s Sammy Akuthota hospitality magic with the pop-up opening of Hyderabad Hotel on Pollen St. This time he’s teamed up with Wellington beer company Garage Project to deliver the first phase of his long-awaited “beer jungle” that will become permanent fixture before the end of the year.

Hyderabad Hotel will stick around for an undisclosed ‘summer’ period — you’ve still got at least six weeks left to visit — but really, you should go immediately. 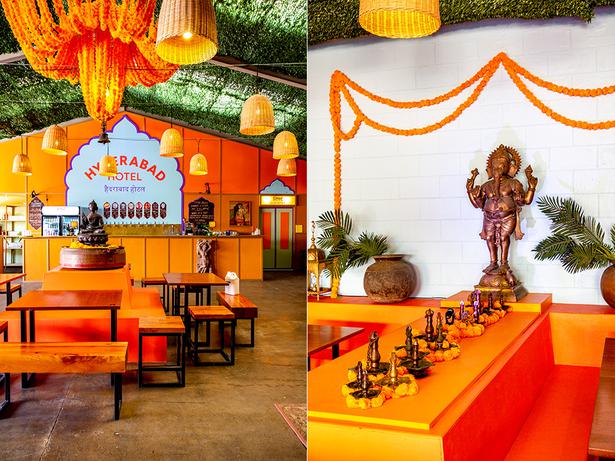 By now its 1970s Indian hotel lobby-inspired fit-out will be all over Instagram. The space features jewel-toned orange, blue, and green painted walls, wicker lampshades, golden hanging marigolds, kitsch old-school telephones and fake ‘elevator’ and concierge signs written in Hindu. Long tables and benches provide ample seating both inside and in the sun-soaked courtyard.

The team have pulled off the transformative design in as little as six weeks.

“We wanted to play and have fun with the design,” says Sammy. “I find that’s what’s lacking in Ponsonby, everything around is just so straight lines and clean edges. I hate doing that and so does Garage Project. I want to return to what Ponsonby and Grey Lynn used to be back in the day, not super flash places but super chill and with character.”

The menu celebrates Indian street food snacks “but not like Chai Lounge or Mum and Dad’s traditional stuff,” says Sammy. “Most of Auckland’s already had that so I wanted to something a little different.”

Plus plenty of beer too, with eight Garage Project brews on tap, and a selection of fragrant cocktails including a South Indian-style espresso martini.

Be sure to try the special collaboration rice lager between Sammy and Garage Project to celebrate the opening.  The 'Beeryani' (pun intended) takes its cue from Hyderabad (the capital city of southern India's Telangana state Hyderabad that’s famous for biryani) where Sammy’s family are from 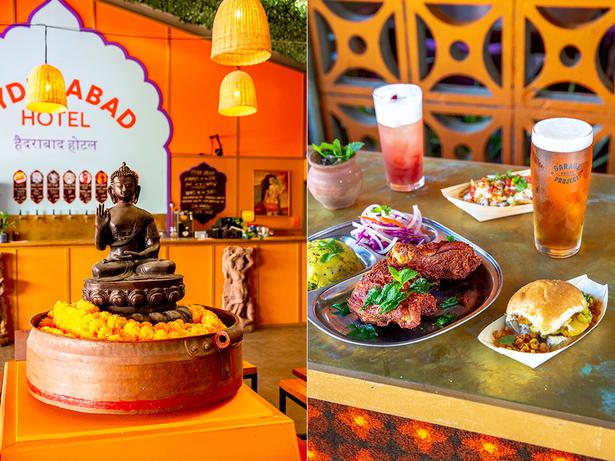 “If you know my normal menus, you’ll know I love my dad jokes,” laughs Sammy. “I still don’t know if they really wanted to do it or they were just indulging me.”

Hyderabad Hotel won’t be a place to load up on booze and instead keep in line with Sammy’s low-key, family friendly approach.

“I don’t want it to be open late and be like a club,” he says. “It’s going to be open from midday for families to come through and closed by 11 so my neighbours are actually stoked to have me around. I don’t want this place to be a nuisance to the area I call home.”

It’s been a two-year battle with Auckland council to get to this stage of opening, and the site next door, currently being used as his office, is already underway with construction for the permanent space aimed for opening in September. Expect similar food in the permanent ‘beer jungle’ (the official name is still being decided) but with a Japanese twist — “lots of yakitori but with Indian flavours,” says Sammy. His love for beer on full display with a hopeful 38 beer taps on site.

The two neighbouring properties are being leased by Sammy off his folks... they’ve come around to his ideas since he opened the first Chai Lounge in Sandringham.

“I’m so thankful for the support of my mum and dad,” he says. “People come and knock on their door all the time asking to build 10 story flats here so it’s super tempting for them to sell and retire. I’ve convinced them to let me have fun in the hospitality industry over the next 10 years.”