Bicycles are the preferred mode of transport in Forte dei Marmi. Photo / Supplied Life is definitely beautiful in Forte dei Marmi, where the rituals of summer are elevated with Italian flair

Forte dei Marmi — or “marble fort” — is a postcard-perfect town on the Tuscan coast where, for generations, the smart set of Florence and Milan have descended for idyllic summers by the sea.

Forte, as it’s referred to, enjoys a fabled history synonymous with artists, writers and Italian aristocracy. Set against the beautiful backdrop of the Apuan Alps — and just over an hour by car from Florence — it was in Forte dei Marmi that Thomas Mann reportedly penned Death in Venice when he was a guest at the Hotel Regina.

Sculptor Henry Moore frequented the resort in the 1960s searching for marble in nearby Carrara. Opera singer Andrea Bocelli lives here in a villa along the lungomare, the town’s five-kilometre waterfront. Across from his home is Alpemare, a bagno (beach club) that he owns, one of 98 bagni that line an impossibly wide beach with meticulously groomed sands.

“I’m lucky to be Italian, really lucky to be from Tuscany, but I feel incredibly lucky to live in Forte dei Marmi,” Bocelli has famously said of this Versilian idyll. 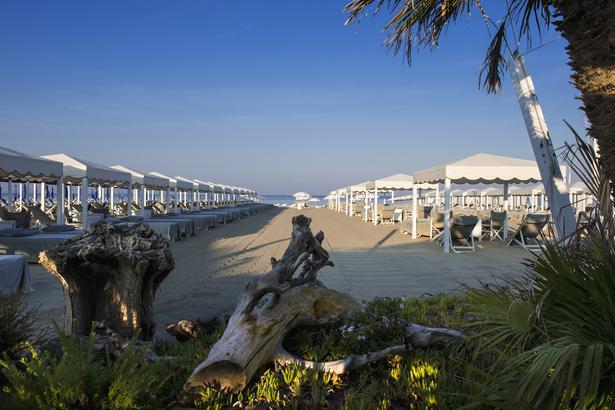 It’s as if time has stood still in Forte, or at least it pauses from June to August. Summer rituals remain constant for the generations of well-heeled Italians who return year after year. Bicycles are the preferred mode of transport; not jazzed-up mountain bikes but simple, old-fashioned ones with wicker baskets. The pace of life is beautifully slow, as you pedal down tiny streets lined with towering Italian stone pine trees.

On a typical summer morning locals ride into the town piazza, often along the bicycle track on the lungomare, elegantly but casually dressed, to enjoy a coffee at the Caffe Principe, a local institution where waiters in crisp white shirts and black ties have been serving coffee and Campari for decades.

The culture of sunbathing has been elevated to an art form in Forte, with bagni catering to a multitude of tastes and budgets. It’s all very civilised; guests are given lockable private cabins to get changed in before heading on to the sands to enjoy the day at their tenda (canopied cabana), usually set up with deck chairs and sun loungers.

At some of the smarter clubs the tendas come with safes, luxuriously large towels and food service. There is an obsessive vigilance in keeping it all very orderly; bagni staff groom the sand at dawn and dusk, using large rakes to remove rubbish and create a “corduroy” effect on the sand. The blue-grey Tyrrhenian Sea is shallow and calm, perfect for children, and the almost guaranteed daily sunshine makes for perfect family holidays. 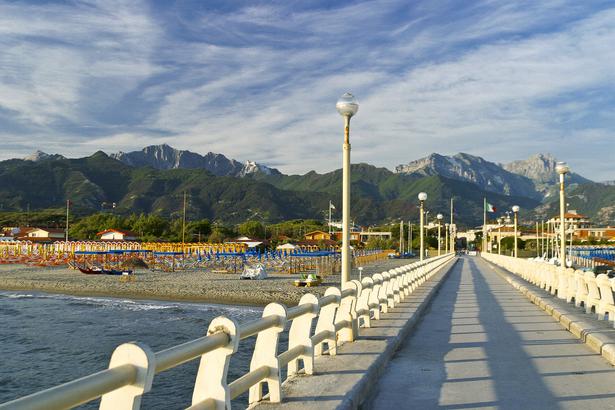 As the sun sets, the bicycles return along the lungomare; people venture back to the village for passeggiata: the ritual before dinner where locals walk into town to enjoy cocktails, shopping, or simply just to preen, see and be seen in their summer best. It’s all very stylish but not pretentious; think men and boys in pastel linen shirts, sleeves rolled loosely at the cuff; women in Dolce & Gabbana floral pleated skirts. Summer nights are languid and long in Forte, with boutiques like Prada and Gucci open past midnight.

To the south of the town centre is Roma Imperiale, the most elegant area, where palazzos, palezzinas and grand villas are hidden behind huge hedges. Gianni Agnelli, the late dashing Fiat tycoon, spent summers here in his youth, his father, Edoardo, having purchased the Villa Costanza in 1926. The family spent summers here for more than 30 years, becoming instrumental in putting Forte dei Marmi on the map for Italy’s glitterati. Today, you can retrace their glamorous footsteps by staying at their villa, which was transformed into an elegant five-star hotel in 1969 when it was acquired by the Hotel Augustus and Lido. 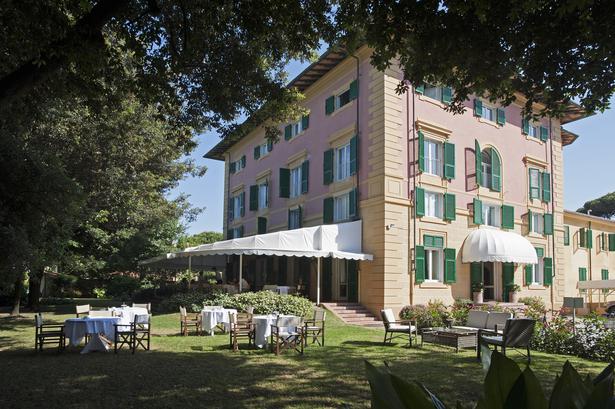 Unlike all the other palazzos along the waterfront, the Villa Agnelli, as it came to be known, had something no other villa did; a secret passageway under the lungomare. The Agnellis didn’t have to cross the road when they wanted to go to the beach, they simply walked under it. Today guests at the Augustus have exclusive use of this secret passage to access a super-chic beach club and the restaurant Bambaissa.

To the north of town is an area known as Vittoria Apuana, where the homes are less grand in scale but equally elegant. “If Roma Imperiale is Bel Air, then Vittoria Apuana is Santa Monica,” explains Vanessa Bonami, a New York native and Forte regular. Bonami has been coming here since she moved to Milan seven years ago with her husband, Francesco, an art curator.

“Forte is ‘down-low’ chic. This is why I like it,” she explains. “The food and the atmosphere are what people dream they want summer to be,” says Bonami, who spends her summers at Gilda, a popular bagno. “I would sooner change husbands than beach clubs! The food at Gilda is amazing,” she laughs. 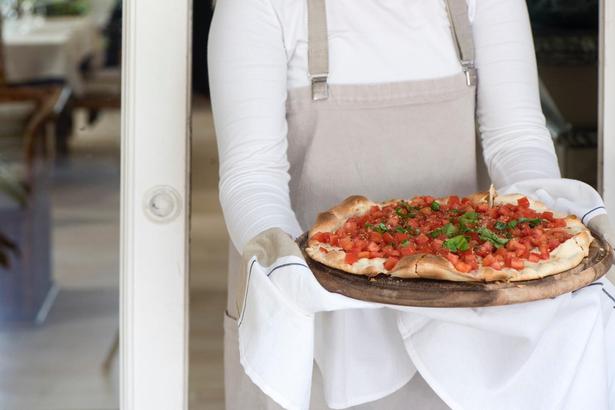 Head to Gilda any lunch or dinner and it’s easy to understand the allure. Among the menu highlights are an indulgent spaghetti with scampi and black truffles; the thinnest, most delicious pizza; and fish cooked to perfection.

Gilda was started in 1984 by the late Luigi Tabarani and his wife Adua Minari. In 1997, after a fire decimated the bagno and restaurant, the couple’s daughter Ilda, along with her new husband, Riccardo, saw an opportunity to reinvent the place, making it more upmarket and expanded the menu and offerings. Two decades later the club has a reputation as one of the best places to sunbathe and eat on the Tuscan Riviera.

Minari, now 82, works every day in the kitchen, overseeing the baking and desserts and the deep fryers used to cook their legendary fritto misto (fried mixed seafood). “It’s really hard to do good fried fish. It’s all about the oil. My mother changes the olive oil three times a service,” explains Ilda. 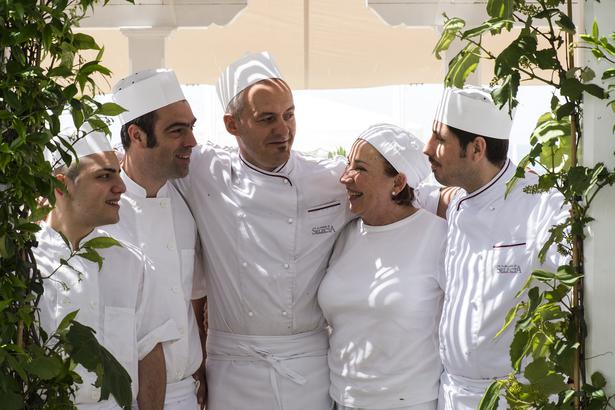 “My mother checks everything. She checks all deliveries. Yesterday she sent the strawberry supplier away and said come back tomorrow with better strawberries!”

Tabarani’s tireless attention to detail ensures Gilda’s quality never dips. Her sons, Niccolo and Edoardo, work during their summer holidays while back from their studies in the UK. “The boys say I should just oversee and not work so much,” she laughs. “It’s not possible. I try to explain to them that if you want to make sure everything is perfect you have to check everything yourself, every time, every day.”

“For me Forte dei Marmi is one of the best places in the world,” explains Tabarani. “You can go everywhere by bicycle. You have a lot of choice of restaurants and shops. It’s a great place for children. They come every summer and make friends. Forte dei Marmi is about family.” 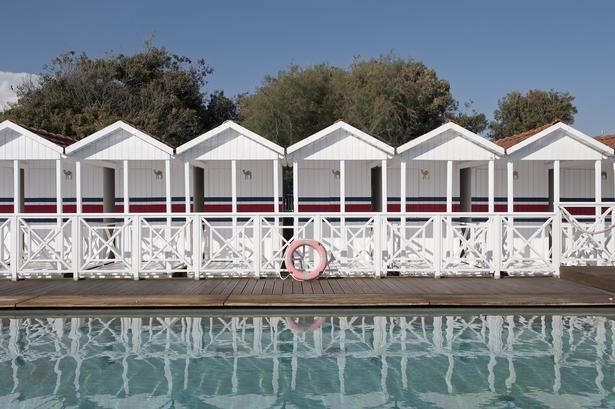 BEACH CLUBS
Cabanas can be rented by the day, week or month at beach clubs, known as bagnis. Fees can range from $50 a day to several hundred. Typically, prices include the use of a “cabina” for changing, a “tenda” with beach chairs and sun loungers, and shower facilities. 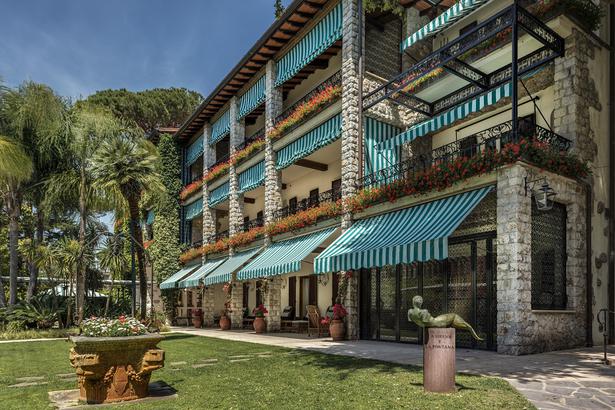 HOTELS
Augustus Hotel & Resort. In addition to the Villa Agnelli, the hotel operates a series of buildings and a cluster of seven villas with the chic and authentic interiors. The original building, the Villa Pesenti, was designed in 1939 by renowned architect Osvaldo Borsani. All guests have access to a private tunnel to the beach. Works by Henry Moore can be found on the walls and the artist’s daughter continues to stay here every year. Viale Morin, 169. Forte dei Marmi 55042. Augustus-hotel.it

Villa Gilda. In the hills behind Forte dei Marmi, about 10 minutes by car, is the Villa Gilda. Nine chic bedrooms with king-size beds and luxurious bathrooms make up this intimate hideaway, featuring views across the Versilian coast. Guests enjoy an impressive breakfast buffet — with sinfully delicious cakes, healthy juices and eggs cooked to order. Via Balone, 2, 54038 Montignoso. Gildafortedeimarmi.com 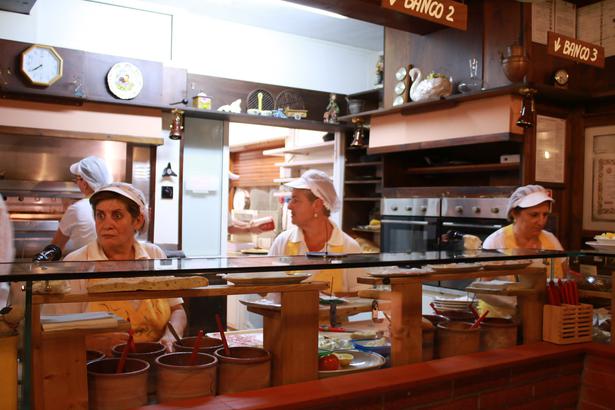 Caffe Principe. An institution, perfect for a cappuccino in the morning or an Aperol spritz during passeggiata. Via G. Carducci. Forte dei Marmi.

Orlando. Noted focacceria and pizzeria since 1959. Open until 3am on summer weekends. The pea focaccia is to die for. Via Colombo, 80, 55042 Forte dei Marmi. Orlandofortedeimarmi.it

Osteria A’ Pagliai. Famous for its steak, this charming restaurant set in lush gardens on the outskirts of Forte dei Marmi is busy every night and for good reason. Via S. Giuseppe, 84, 55047 Seravezza.

No longer a hippie hotspot, Byron Bay is fast-becoming one of the world’s ultimate wellness destinations

Welcome To Lizard Island, The Resort Offering Luxury With An Important Lesson

Escaping to a luxury resort in the Great Barrier Reef isn’t all snorkelling and sundowners. It’s also an opportunity to learn a...