In retrospect, I should have noticed something was afoot three years ago, when I interviewed Art Green at a well-known Kohimarama cafe and he wore a pair of slim-fitting sweatpants in classic grey marle, despite the fact he was neither mid-workout nor workout-adjacent.

I felt a little embarrassed for him, which is embarrassing to admit, because who was I to think I might be sartorially sophisticated enough to critique the style of The Bachelor? From memory, I think I was wearing khaki chinos and stained brown suede boots.

Those grey marles had energy, at least on Green’s legs. He was not only a world-class stud but also a likeable heartthrob, who had recently and publicly fallen for the most likeable reality TV contestant in New Zealand’s history and later married her. Some people absorb the energy of their garments and some bestow it. Green was a bestower.

Although I didn’t know it at the time, Green was not at the cutting edge but was actually riding a wave that had really begun to crest a year or so before. It was a moment that can perhaps be most accurately traced to a story that ran in GQ in June 2016 under the incredible headline: “A$AP Rocky Went To A Fancy Restaurant in Track Pants”. 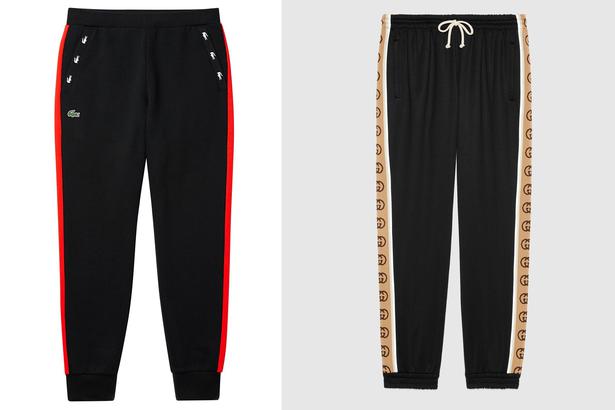 (Side note: For this story, I pitched the headline “Three years ago, Art Green went to a Kohimarama cafe in track pants.” That headline was rejected.)
The GQ story detailed the visit made by A$AP Rocky to West Hollywood hotspot The Nice Guy, during which he wore a pair of $400 purple trackies from Milan-based streetwear label Palm Angels. The story ran: “... wearing track pants to one of the hottest restaurant/bars in town is something only the most chill-bro (or one of the most confident men in the style game alive today) would likely not think twice about”.

Around this time and possibly not coincidentally, New Zealand men were going soft on suits after years of growth. Kiwi men, it seemed, no longer wanted to look like Don Draper or possibly to feel like him, trussed up in all that tight tailoring. There was a power vacuum and soft leisurewear, propelled in part by A$AP Rocky’s high profile visit to The Nice Guy, appeared ready to fill it.

Nothing happens in isolation, of course. Around the same time, a string of fashion influencers were big-upping track pants in photos from fitting rooms and bedrooms in fashion capitals and outposts around the world.

One brand stood out from the rest, and that brand was called Needles.In 2017, under the headline “The World’s Most Hyped Track Pants”, the website Highsnobiety wrote: “For the last couple of months, this particular pair of tracksuit bottoms from Keizo Shimizu’s label, Needles, has been inescapable, likely gracing your Instagram feed courtesy of celebs like A$AP Rocky, A$AP Bari and Tyga.”

Jordan Gibson, of Auckland clothing label Checks Inc, watched closely as the rise of Needles - and particularly their appearance on the legs of A$AP Rocky - changed the game. “That was maybe one of the big catalysts,” he says. From there, things moved apace. In March 2018, in a piece in this very magazine, Viva fashion director Dan Ahwa decried the inhibiting effect the traditional tight men’s trouser has on sperm production, adding: “Luckily, relaxed trousers are back in style allowing more breathing space below the waist, from men’s peg-top trousers to the ubiquitous dressed-up track pants you can wear round the clock.”

If you were part of Big Track Pant at the time, the A$AP ’n’ Needles-led late 2010s must have felt like a golden era. If you were of a nervous disposition, you must have been wondering when it was all going to come crashing down. At that point in history, no one had ever heard the phrases “Lockdown Leisurewear” or “Zoom-friendly bottom half.”

Things were about to get much, much better.

If you weren’t part of the industry, or weren’t really paying attention, it was possible to have not noticed any of the aforementioned track pant traction, at least until April this year, when the Los Angeles Times ran a story with the now-infamous line: “Enough with the WFH sweatpants, dress like the adult you’re getting paid to be.” This story provoked a predictable online firestorm which made it clear the Los Angeles Times had simultaneously missed the boat and jumped the shark.

One of the many smackdown-based replies appeared in Esquire, under the headline “If You Hate Sweatsuits, You’re Not Wearing Them Properly” and summed up the countervailing opinion thus: “Just as charcoal suits don’t scream ‘finance worker with a wife that never texts back’, sweatsuits don’t really mumble ‘high-scoring 30-year-old Fortnite veteran’.”

Men’s Health summed up the ensuing climate in July: “It’s official: We’re living in the golden age of sweatpants.” Last month, in an article about the founder of Needles, Keizo Shimizu, Esquire compared his now-iconic track pants to the Holy Grail and implicitly chastised those who failed to recognise the rise of the track pant as a category: “We’ve had highly covetable jeans, tees and sneakers - all once-humble items, now elevated through construction or scarcity or both - for a long damn while. You really didn’t see this coming?”

Also last month, the New York Times published a feature article titled “Sweatpants Forever: How the Fashion Industry Collapsed”. That article contained the line: “In April, clothing sales fell 79 per cent in the United States, the largest dive on record. Purchases of sweatpants, though, were up 80 per cent.”

This is all to say that lockdown didn’t make track pants acceptable - they were already far beyond that. What it did was make them massive.

Jordan Gibson of Checks Inc says: “We certainly found a spike in those kinds of items throughout that time and it sort of seemed like that was almost the only thing people were buying from us; sweatshirts and sweatpants.” In the past year, Barkers says it has seen a growth of 200 per cent in sales of track pants, with most of that coming in the past six months. Hallensteins says its track pant sales had begun trending up a year ago. “But when lockdown happened,” the company’s buying manager Jason Barrow says, “it just went through the roof.” The company’s main sweats range has been sold in between 25 and 30 colours this year.

Nothing like this has been seen in the track pant world, in New Zealand at least, since the Barkers phenomenon of the early 90s when, the company says, it sold 50,000 pairs of its pants-based branding billboards, following the marketing masterstroke of outfitting high school first XVs and rowing eights.

Barkers reintroduced the track pants around 10 years ago and they have been one of the company’s top sellers ever since. “And then when we had Covid,” chief operating officer Glenn Cracknell says, “they just went nuts.”
Despite the success, he says, he doesn’t think track pants have reached their sales peak yet and probably won’t for another year or so. “There’s still growth to be had,” he says. “People just want to be comfortable.”

Gibson says the current track pant moment is probably beyond even the national mania for Barkers sweats in the 90s. Unlike then, when they were worn by, for example, his dad, they are now an item that is covetable, desirable and acceptable in a wider range of settings.

READ: What 20 Years Of Net-a-Porter & Its Bestsellers Have Told Us About Fashion

“Despite those probably being a trend item at the time I’m guessing it was something that, you know, maybe you were on the rugby pitch supporting the kids on the weekend, or at home but almost nowhere outside of that. I think we’ve sort of progressed beyond that. If you’re doing it in the right way, you can wear them in many more kinds of circumstances.”

He says, “A plain dark track pant, perhaps with a small accent, styled the right way - nice jumper, smartish sneaker - in, I would imagine, 70 to 80 per cent of work environments, you are probably going to be good - maybe even stylish.”

Over the past few years, he says fashion in general has trended towards comfort: “You know, casualisation of lots of different sectors and favouring of sneakers and jeans in the workplace, and sweatshirts and all these sorts of things that are just significantly more comfortable than whatever the counterpart was before that. And people don’t really go back from that, you know? Once you’ve kind of felt that or learned that, you’re like, ‘Man, this feels great. I don’t want to change’.”