With two highly acclaimed EPs and lauded for her energetic live performances, rising rap star JessB is a force to be reckoned with. Few people can lay claim to being good at two different careers in life, yet the evolution of Jess Bourke from professional netball player to JessB, the bona fide rap sensation, has not come without serious hustle. One of the most exciting female rap artists to emerge on the local scene, her career trajectory since her breakout year in 2017 has been remarkable.

Earlier this year Zane Lowe, NZ expat and host of the Apple Music radio station Beats 1, showed his support for Jess on air. “I feel like JessB is starting to connect. People have different ideas about what that means, but for me the best connection is when you find real growth above ground.”

She's been crafting raps since high school and her musical heroes Missy Elliott and Timbaland, a partnership that defined the sound of hip-hop in the early 2000s, continues to leave a major impression on Jess. "Her music is still so relevant today and doesn't sound dated. That's a pretty good indicator of a legend," the 25-year-old muses over the phone from Sydney, where she is currently touring.

Her previous life playing netball for the Central Pulse and the Northern Mystics surely has some bearing on this new game plan, performing at a diverse range of festivals and events including Venice Biennale, Rhythm & Vines, Northern Bass, Auckland City Limits and Splendour in the Grass.

One of the country's premier rap artists, David Dallas, first noticed Jess when she became the first woman to participate in his 64 Bars initiative, a platform for emerging rappers to showcase their skills. "She came in and handled it first take. She's got a vibe, and she's super confident," David said after her performance.

She's toured with Ladi6, Six60 and Fat Freddy's Drop and supported visiting acts such as Stormzy, YG and Little Simz — opportunities no doubt contributing to her rapid rise to the top.

This summer, she's preparing to join Fat Freddy's Drop on their tour and is confirmed to perform at Laneway Festival in January. It's the season of JessB. "I love summer, music and performing, so it's my favourite time of year. I've built a really cool team that comes to shows with me and I always have so much fun with the people around me." A jazzy blazer from the forthcoming Giambattista Valli X H&M collection brings a fresh attitude to a classic piece. The Rome-born, Paris-based couture and ready-to-wear designer launched his eponymous brand in 2005, having previously worked for the Fendi family and as creative director at Emanuel Ungaro. In July 2011 he presented his first couture collection, having been accepted as an official member of the exclusive Chambre Syndicale de la Haute Couture. Giambattista Valli X H&M blazer $249. Anni Lu earrings, $198, from Workshop.

Her pulsating track Take It Down from her 2018 debut EP Bloom, featuring Rubi Du aka Silva MC, had everyone moving last summer, appealing to both traditional and alternative audiences with its layers of musical influences.

Produced by P-Money, who Jess met via music sharing website SoundCloud in 2014, the song's raucous dance-hall beat and raga-influenced hook courtesy of Silva MC perfectly captured the essence of having fun; while elsewhere on the EP, the track Pushing The Space featuring Phodiso included an impactful message about encouraging people of colour to reclaim space. It's a topic ripe for conversation.

"I do feel lucky to have been recognised as a female rapper early on," she says. "I've been able to manoeuvre and move through the industry and book shows and festivals. However, there are conversations happening at the moment about not having enough female artists on the bill. There's definitely more room for support for women and non-binary artists in general."

In August she released her follow-up EP, New Views, accompanied by her first solo tour, the experience allowing her to connect with her growing fan base. "Performing is one of my favourite parts of making music. You do all this work to create the music and a particular story, and when you perform it live you see how people have connected with it." "When you start out, you're often supporting other artists on their tours. It's different when it's your own. I was so grateful to everyone who spent their hard-earned money to come and watch us perform. My Wellington show was especially memorable because it was sold out and the crowd was amazing. Sharing that experience with my friends Silva MC, rapper Vayne and DJ Shaki Wasasala aka Half Queen was special."

Like the New Zealand female MCs before her, including Teremoana Rapley, Coco Solid and Ladi6, Jess joins an alumni of powerful female rap artists adding their own perspective to the genre, breaking down barriers for emerging rappers and making new opportunities for themselves and other female musicians.

In 2018 she was nominated for best hip-hop artist at the New Zealand Music Awards. Her compelling performance of Take It Down and Set It Off proved to everyone she had what it took to be both a successful recording artist and a fearless live performer.

Just last week she was nominated for Best New Zealand Act for the MTV Europe Music Awards; and before our interview she had just wrapped up mentoring youth as part of a creative project with Manawa Ora and Nga Rangatahi Toa. On the day of our interview she released a new music video for her song Time Out featuring another rising rap star, Abdul Kay, with Jess rapping "I'm going hard until it's time out". True to form, she means every word she raps. "I'm trying to take it as far as I can. It's reassuring to be nominated for awards and to be recognised by industry, but people that I feel most validated by are the people I am able to connect with through my music and stories."

Born and raised in New Zealand by a Kenyan father and Pakeha mother, Jess is proud of her heritage. A gold pendant in the shape of Africa is a sentimental nod to her roots. "It's my favourite piece of jewellery and the one thing you know I'm always going to be wearing."

As an advocate for having fun, Jess adopts the same attitude with her vibrant sense of style. Understanding the power of dress on stage is not lost on Jess. "I think fashion is a creative expression of who you are. I've aways loved bright colours and patterns, and that spills into my fashion sense, especially when I'm performing, because on stage that's going to make the performance more exciting to look at."

Creating a community is also part of Jess' passion. Her popular club night, Filth, hosted alongside Half Queen, is a reflection of the progress and influence the next generation has on Auckland's nightlife — taking it into their own hands to prioritise safe spaces for queer, trans, non-binary people of colour and women of colour. 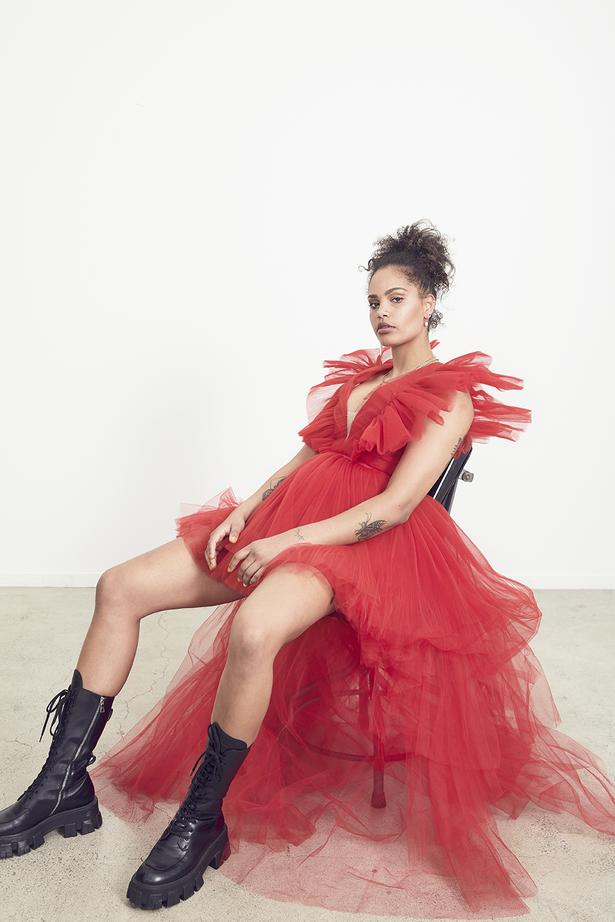 As a rapper addressing themes of diversity, inclusivity and empowerment, she's aware of the influence she welds — but to a degree. "I don’t think I can speak on everyone's behalf. One thing that starts to happen is that prominent figures come through any sort of movement and then suddenly they become the spokesperson for every single person.

"I think the point is that there is a vast diverse community of people from all walks of life and they all have their own individual voices. They all need spaces to tell those stories. With Filth — it's such a tiny part of the LGBTQ community in Auckland, but we felt we wanted to create a space specifically targeted for the nightlife."

"The challenges now are being able to hear all voices, and not just the loudest ones. It's even providing spaces for people who don’t want to go out and party at night, like a book club. The challenge is being able to establish many voices and many spaces to cater to everyone's needs."

Speaking with Viva in 2017, Jess described her music as "high energy and exuberant. I don’t like to put my sound into one box, but I love groovy tempos and beats that allow my voice to bounce and vibe within them".

At the heart of it, Jess' music provides a happy antidote for a disenfranchised generation, who are gravitating toward Jess' winning formula of music that acknowledges the serious issues but with an empowered, optimistic beat. "We are much more immersed in social commentary and social change, because everybody can have a voice on social media" she says.

"We can't get away from it in the same way we used to be able to. I don't necessarily think that's a bad thing. It makes us more multi-faceted as people."

'New Views' by JessB is out now.