Alma's delicious menu is based on the flavours of Andalusia, a southern region of Spain. Photo / Babiche Martens Some restaurant sites are cursed and you could make a strong argument that this is one of them.

It should be just as successful as any other Britomart-adjacent location, just across from the water and spitting distance from office buildings full of hungry professionals whose house equity is rising even faster than the sea level next to their new beachfront property.

Yet nothing has taken off on this corner site, making it the perfect takeover challenge for the people who own Amano, arguably Auckland's best all-rounder restaurant.

The first thing they've done is turn it inside out. 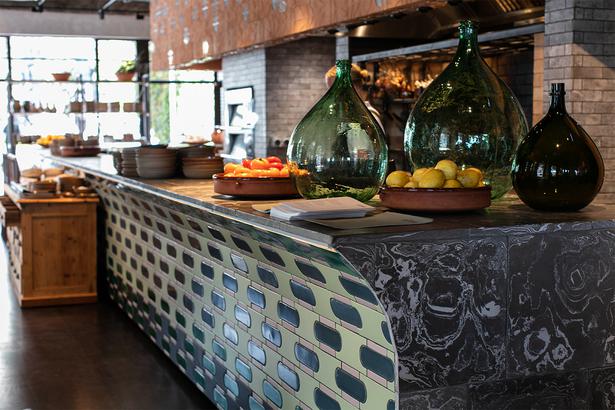 It's possible that part of the problem was being so close to the sea and sunshine, yet having to view it from inside the ground floor of a multistorey building. But the new owners have wrapped the whole restaurant in "outdoor" seating, replacing walls with windows so that you can sit in sunlight without getting windblown: al fresco with insurance.

It's had a major effect on the atmosphere of the place — think how fun Blue Breeze Inn is in the way the wrap-around balcony connects you to Ponsonby Rd — and immediately makes you feel like you've arrived at a party, rather than an insurer's cafeteria.

A full restaurant helps with that ambience of course, but it's chicken and egg.

Beyond the structural changes to the building, they've added loads of softer stuff too — heaving baskets of produce, for example, and an open fire at which chef Jo Pearson does stuff that looks like real cooking.

A crackling log is much more cosy than the digital beep of an induction oven touchpad, and of course it makes a difference to the cooking too.

Aside from Pasture I can't think of anywhere else I've seen it, and it helps define Alma as a restaurant where the basics matter.

It's illegal to mention a Hip Group restaurant without talking about the staff, who are, once again, exceptional at Alma.

You already know how a good meal can be ruined by a waiter who's not feeling it, but places like this one remind you how much a great waiter can add to a night out. 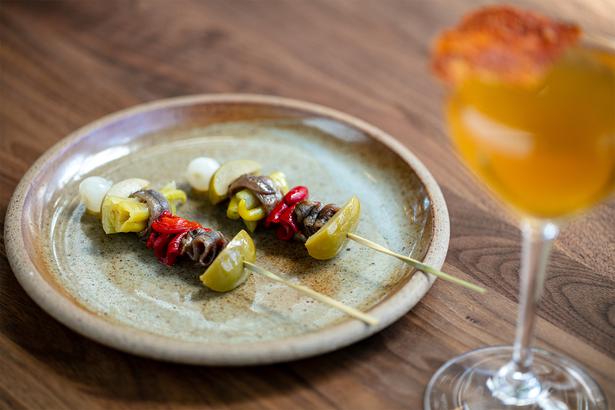 The "Gilda" is a skewer of olive, cocktail onion, anchovy, and pickled pepper. Photo / Babiche Martens

You love the room, you love the vibe and then somebody with great humour and kindness arrives at your table to offer you a drink and suddenly there are very few places in Auckland you'd prefer to be.

As at Mr Morris there is a Vermouth list; this aromatised wine apparently becoming what sherry was to restaurant menus in the Twenty Teens.

I splashed out on an expensive one and it arrived at the same time as my old friend from Hamilton, Dougie the builder, who had a sip and told me it tasted like cough medicine then ordered a beer, with a special request that they leave it in the can.

The menu is based on the flavours of Andalusia, a southern region of Spain.

I used to have a job taking journalists on food tours of this region but even I needed help translating many of the words and terms on the menu.

They've obviously gone very deep researching the flavours, and added their own cheffy twists to make the food worthy of an expensive Auckland waterfront restaurant.

A typical tapas bar in Jerez might serve you a plate of white anchovies but at Alma one of their signatures is the "Gilda": a skewer featuring an olive, a cocktail onion, an anchovy, and a pickled pepper.

Back in Spain your glass of fino comes with a few slices of manchego cheese — here the cheese is served with fresh, sweet corn kernels on a bite-sized tostada (like the rest of the menu the price is a little steep, at $12, but flavour-wise there's lots of bang for your bite). 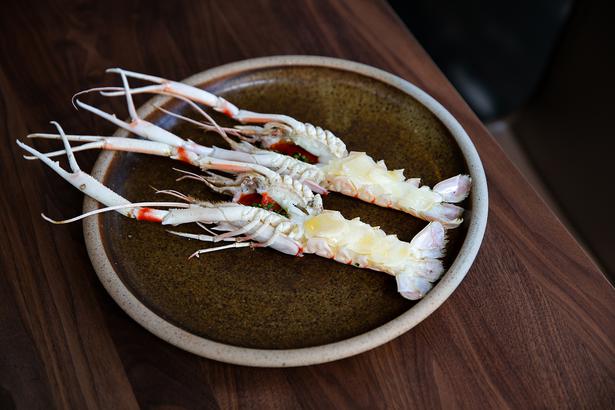 Things get a little fancier on the Andalusian coast, and Alma's scampi, served whole in its shell, was a nice reminder of the seafood treats of Manzanilla country.

Here in Auckland the design of the dish made enjoyment a little difficult — the sweet flesh came out in one piece but the tomato-based sauce was dripped all over the outer shell and legs making it hard to dip into and enjoy.

I loved the pork, which came on a skewer having presumably been roasted over that fire, and served with a flatbread you could wrap around the kebab to pull the good stuff off.

It came with fresh peach and tasted like the best sort of summer barbecue.

The steak was great too — ribeye topped with sherry-dressed mushrooms and a picada, or "finishing sauce", of garlic anchovy and parsley.

I returned for breakfast the following week and found myself even more in love with that menu than what they're serving at dinner time — we had an incredible dish of fresh tomatoes with smoked paprika butter and sheep's milk yoghurt, and a wild mushroom medley with egg and a crunchy crumb.

It might have tasted even better with some high class cough medicine but 9am seemed a little early, so feel free to visit Alma at either or both ends of the day.

The owners have invented a new category of all-day restaurant and while it might be punishing running a business that is only closed for a few hours each night, you won't see any sign of fatigue in the floorstaff, whose bright charms are the best of many good reasons to spend your money here.