As the world prepares for the swearing in of Joe Biden, Caroline Leaper takes a look back at the 17 gowns that made an impact

The famously-stylish and sociable hostess Dolley Madison was the first First Lady to host an official Inauguration Ball, in 1809. In her richly embroidered cream dress, with a substantial bustle, she set the tone for generations to come by pulling out all the stops when choosing her inaugural gown.

Today, the inaugural gown is possibly the most important dress that an incoming First Lady will ever wear (she likely holds only her wedding gown in higher regard).

Over the years, inauguration dresses have captured the world's headlines, marked the styles of the times and been immortalised in the fashion history books and at Washington's Smithsonian Museum, which currently houses all of those pictured here.

No pressure, then, for Jill Biden as she prepares her look for 2021's unique, socially-distanced ceremonies. While we may not get to see Dr Biden in a ballgown, enjoying dancing with her husband in the traditionally packed ballroom, it is expected that we will still see photographs of some celebrations on Wednesday 20th January. All of which allows Dr Biden some opportunity to make an impact and choose something to wear that may communicate her values as a First Lady - just as so many have artfully done before her.

Here, we look back at the 17 most recent inauguration dresses, and revisit the stories behind the gowns. 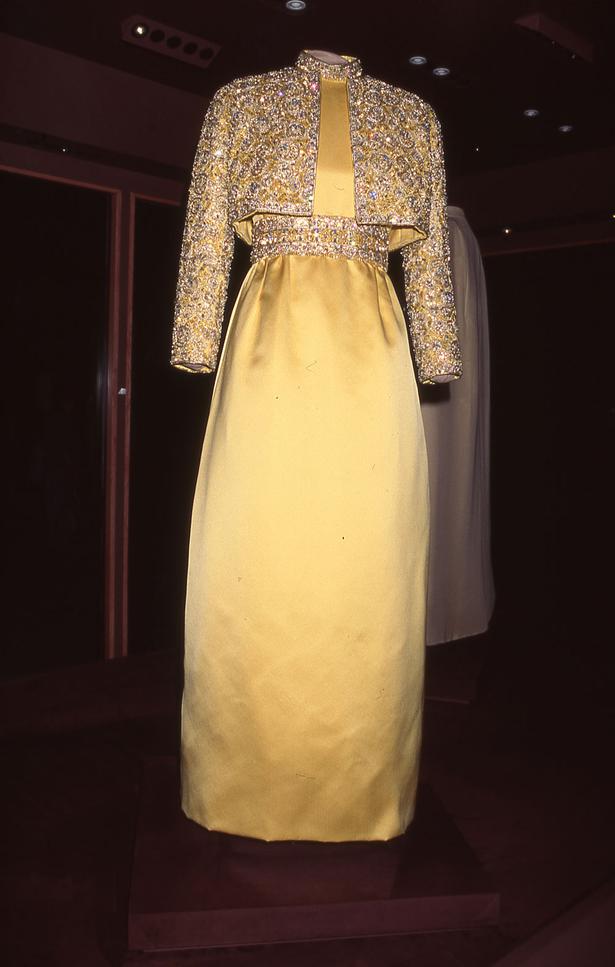 In the run up to the 1953 inauguration of president Dwight Eisenhower, there was much commentary in the newspapers about what his wife Mamie might choose to wear to the gala events. Mrs Eisenhower kept the details of her pale pink Nettie Rosenstein dress, encrusted with over 2,000 crystals, a secret up until a week before the big day, when she posed for formal portraits for the newspapers.

The media strategy employed by Mrs Eisenhower in the 1950s set the tone for all First Ladies who followed her - the inauguration gown is kept a secret, creating even more interest. 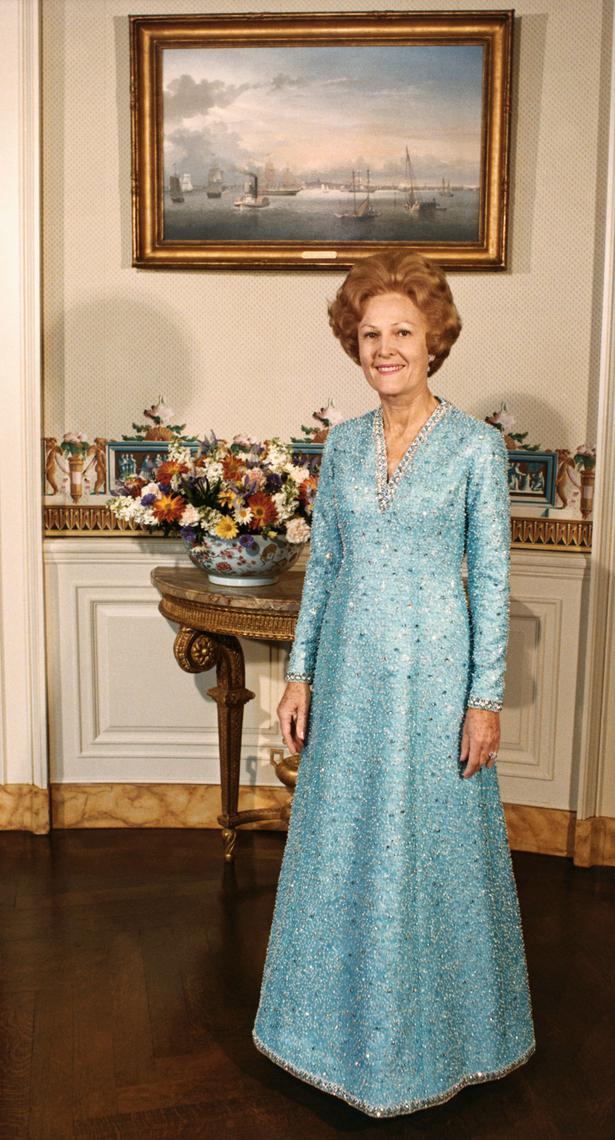 For Eisenhower's second term, Mamie upped the ante even further. This Nettie Rosenstein gown featured more than 3,400 tiny pearls, as well as clear topaz stones. Her bag was designed by Judith Leiber, then an assistant of Rosenstein who would go on to make the inaugural bags for most First Ladies going forward. For President John F. Kennedy's Inauguration Ball, Jacqueline Kennedy wore a white gown and cape that she designed herself in collaboration with Bergdorf Goodman's Ethan Frankau. She was making a statement by having such an input on her look, and deliberately chose white so that she would stand out in black and white photographs at the time. Underneath the cape, the dress featured a sheer overlay panel and a strapless bodice. There was some sparkle, but the overall lack of embellishment marked the arrival of 1960s monochrome, and a contrast to Mrs Eisenhower's 1950s bling. 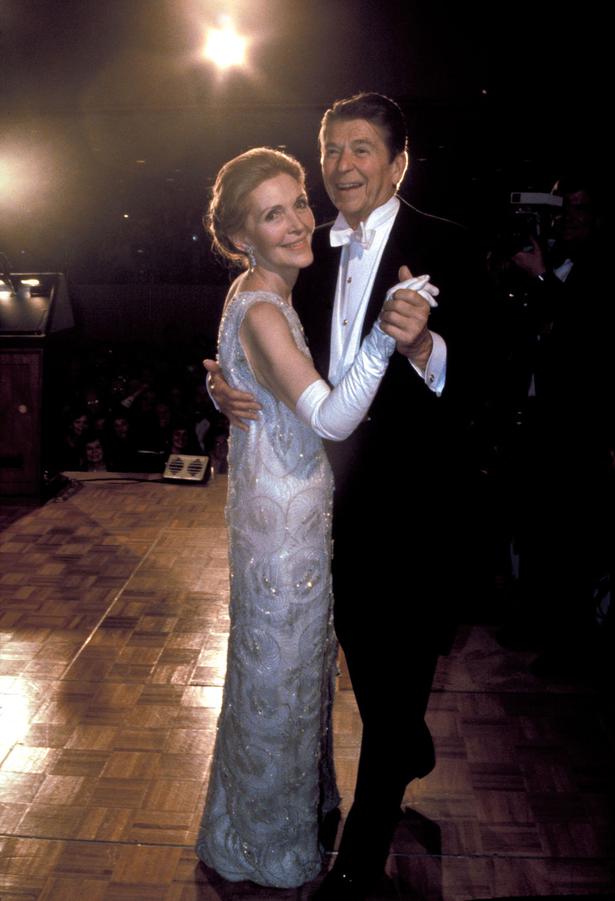 Mrs Kennedy had committed to making the White House “a showcase of American art and history” and had announced that Oleg Cassini, creator of her three daytime outfits for the Inauguration, would be her official designer going forward. Many assume that Cassini created Mrs Kennedy's ballgown that night, however it was in fact Frankau. 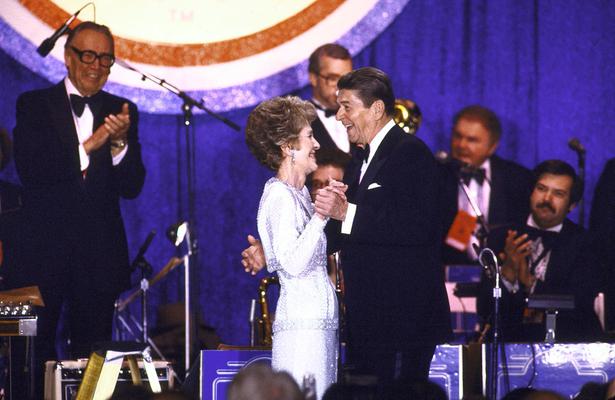 Lady Bird Johnson, wife of the 36th US president Lyndon Johnson, wore a yellow satin gown designed by John Moore and bought through Neiman Marcus in Texas. The modest all-American look was completed with white gloves and pearls - deemed suitable for an inauguration held just a year after President Kennedy was assassinated. 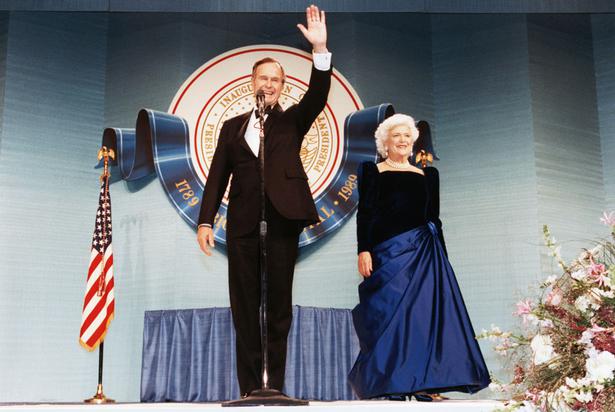 The Inauguration Ball was held at the Smithsonian Institution - the location of the museum which today houses all of the dresses pictured in this story. At the gala, President Nixon announced, 'I like all of Pat’s dresses, particularly this one tonight, and, … when she gets finished with it, you’ll get it at the Smithsonian.' His comments secured the fashion legacy of First Ladies to come. 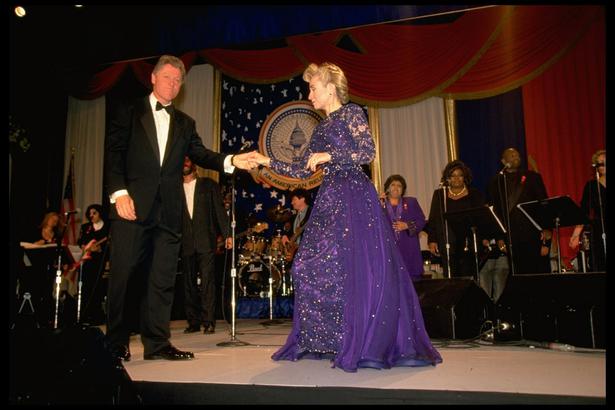 When her husband was elected for another four years, Pat Nixon chose an Adele Simpson gown for his second inauguration ball. This time Mrs Nixon opted for an iridescent turquoise organza fabric, with a lamé material underneath for extra shimmer. Not pictured here is the short white mink jacket which Mrs Nixon added, made by Ritter Brothers. 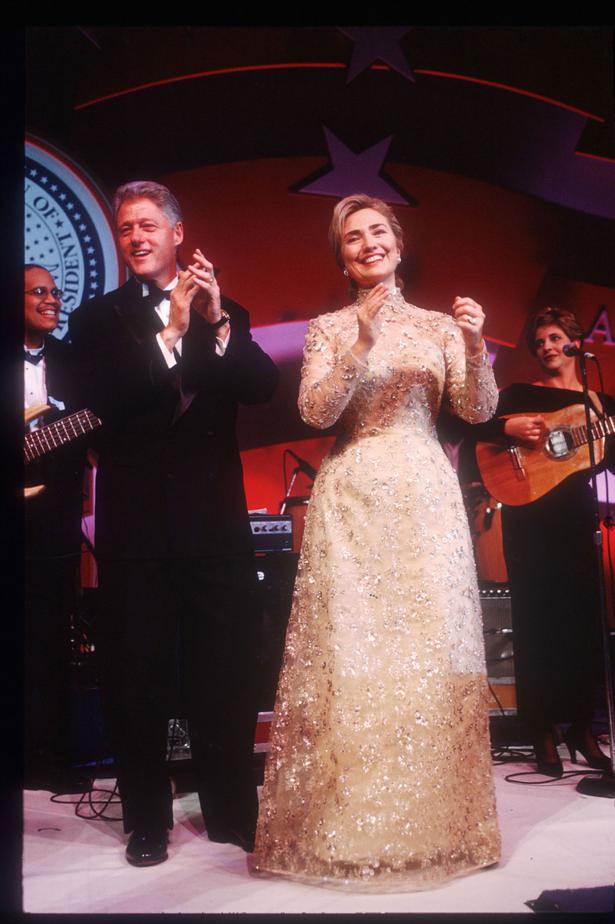 If Jill Biden chooses to buy her dress off the rack, she wouldn't be the first to do so. Rosalynn Carter sent a powerful message when she re-wore the shop-bought Mary Matise dress that she'd worn to her husband's previous inauguration as Governor of Georgia, a sensitive decision made in times when most of the country was struggling economically.

Mrs Carter's dress and matching coat was bought at the department store Jason’s in Americus in the state of Georgia. It drew criticism, as well as praise, in the press at the time as writers questioned whether the public wanted to see more glamour in the White House, and whether Mrs Carter should have supported another American brand by making a new purchase for the Presidential inauguration. At the dawn of the 1980s, there was a demand to see more Hollywood-esque glamour in the White House. Nancy Reagan delivered it at the 1981 inauguration in a one-shoulder gown by James Galanos, symbolising a new era of fashion in America.

The dress was a beaded sheath style, and followed a bright red coat and matching pillbox hat which she had worn during the day events. Ahead of Reagan's second stint in office, his wife Nancy echoed her original look by wearing a long sleeved white gown by Galanos. Mrs Reagan would later wear this dress again on another famous night - the November 1985 White House gala at which Princess Diana danced with John Travolta. 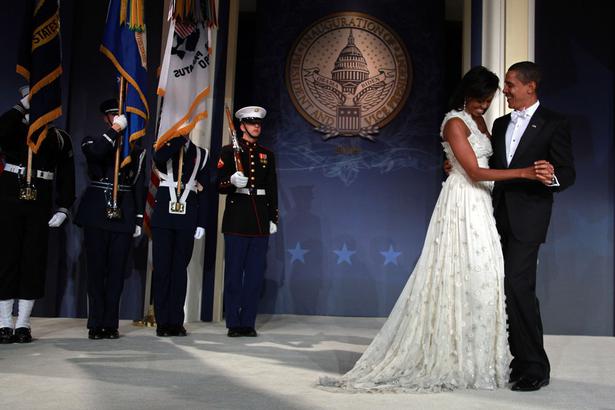 Barbara Bush opted for a pleated confection by Arnold Scaasi in 'Democrat blue' at the inauguration for her husband, the Republican president George Bush. The velvet and satin fabrication, plus the shoulder pads also ticked several Eighties trend boxes. 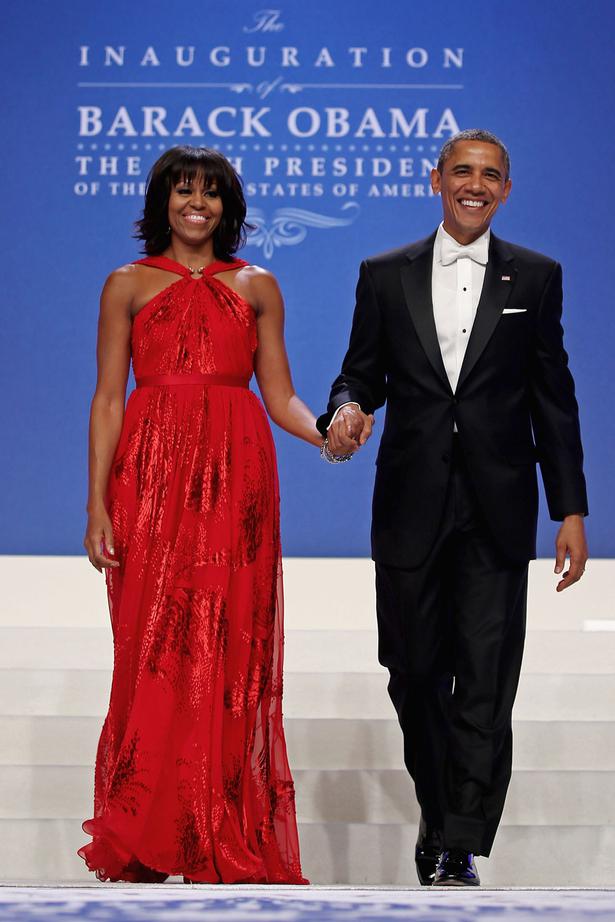 Hillary Clinton chose a rich purple gown by little-known designer Sarah Phillips, attempting to shine a spotlight on a smaller US business owner who was from the same town that she was. The dress was assembled by Barbara Matera, a costume maker for New York's theatres. When Bill Clinton was re-elected, Hillary chose a gown by the globally successful New York-based designer Oscar de la Renta. For some of the night, she teamed with a gold cape by the designer, nodding to Jackie Kennedy's look.

Retrospectively it is interesting to note that both purple and gold are colours associated with the women's suffrage movement. Mrs Clinton wore these colours, and white, frequently again throughout her own 2016 presidential campaigning. Laura Bush chose a design by Michael Faircloth, who was from her home state, Texas. With a crystal and lace overlay, and modest long sleeves, its shade of 'Republican red' was considered a statement of pride for her party.

Judith Leiber made the matching clutch bag which Mrs Bush carried on the night, the same designer who created evening bags for Mamie Eisenhower, Hillary Clinton, Barbara Bush and Nancy Reagan before her. Laura Bush echoed Hillary Clinton by choosing a Oscar de la Renta gown when her husband was re-elected in 2005. This time she opted for a glittering beaded dress in a silver-tone. Michelle Obama wore a one-shouldered dress by young New York-based designer Jason Wu, putting the designer's name firmly on the global fashion map. In the run up to the inauguration there was a tremendous amount of media and social media attention and speculation as to what Mrs Obama might wear. Wu did not even know himself that Mrs Obama was going to wear his dress until he saw it on television, such was the secrecy around the commission.

Her white, romantic dress was embellished with organza flowers and crystals and her bare arms offered a powerful modern image of glamour at the White House, while nodding to Nancy Reagan's look. 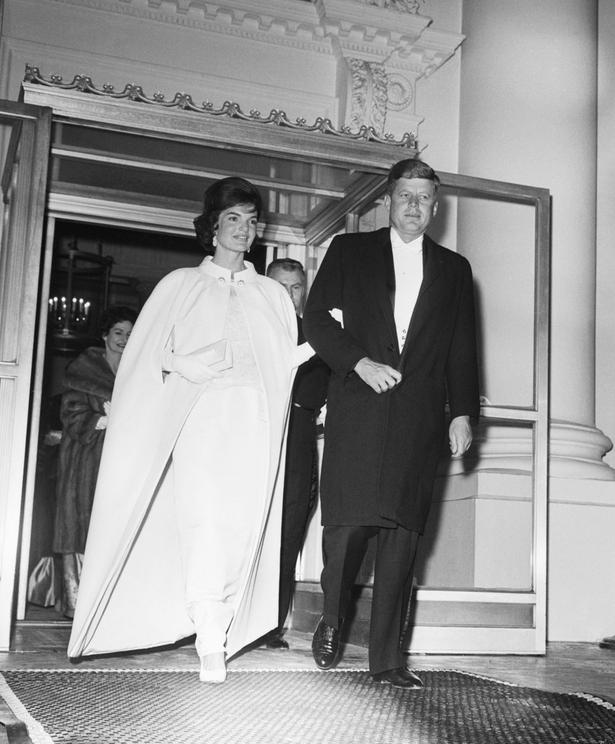 Mrs Obama wore a Jason Wu creation again when Barack Obama was re-elected four years later, despite receiving sketches from a rumoured 15 designers. This time she chose a bright red halterneck gown from the designer. 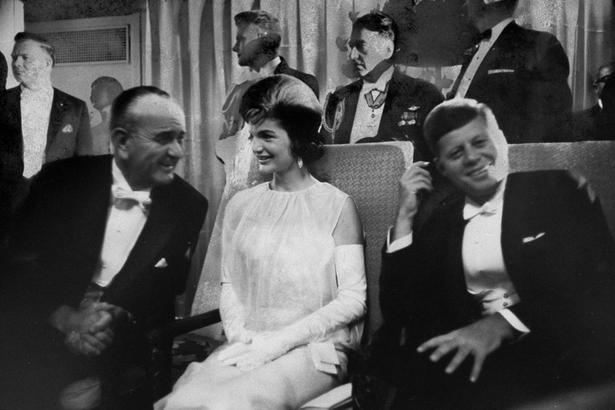 After wearing a pale blue skirt suit by Ralph Lauren for the inauguration day events, Melania Trump changed into a cream gown with sculptural detail for the evening, collaborating with her long-time friend Hervé Pierre. Pierre was formerly the designer at New York-based house Carolina Herrera and her selection chimed with the message which her husband was encouraging at the time, telling Americans to 'Buy American' and put 'America first'.

The design featured a 'Republican red' ribbon around the waist, yet the choice of Pierre was considered bipartisan.

READ: Power Dressing With The Trumps: What The Family Wore On Tour

'Over my 20 years in the U.S., I dressed all the first ladies: Mrs. Clinton at Oscar [de la Renta], Mrs. Bush and Mrs. Obama at Carolina Herrera,' the designer pointed out. 'So I feel lucky and honored to dress Melania Trump, but this time under my name.' [sic]

2021: Jill Biden
And so to Jill Biden - what might the incoming First Lady wear? So far on the campaign trail Mrs Biden has championed new talents, as well as re-wearing old pieces in her wardrobe. She's worn established American brand names, and customised her own clothes and accessories to send literal messages.

Never before has there been so much commentary around political dressing, and Mrs Biden has the opportunity to project whichever type of image she might like to at the inauguration - regardless of whether the format is changed due to the pandemic. The only thing which is for certain, is that the photographs of this historic moment will still be shared worldwide and that her clothes will subsequently become museum-worthy.