The death of the progressive judge who advocated for gender equality, abortion rights and same sex marriage will set off a titanic battle between Republicans and Democrats

Ruth Bader Ginsburg, the US Supreme Court judge who became one of America's great liberal icons, has died aged 87.

Ginsburg died of metastatic pancreas cancer at her home in Washington, DC on Friday evening, the Supreme Court said in a statement.

"Our Nation has lost a jurist of historic stature," Chief Justice John Roberts said in a statement. "We at the Supreme Court have lost a cherished colleague. Today we mourn, but with confidence, that future generations will remember Ruth Bader Ginsburg as we knew her - a tireless and resolute champion of justice."

Mitch McConnell, the Republican leader in the Senate, vowed to hold a vote on Donald Trump's nomination to succeed Ginsburg. That was expected to set off a titanic battle between Republicans and Democrats in the run-up to the election on Nov 3.

Ginsburg became a feminist hero and a social media icon, becoming fondly known as "The Notorious RBG", a riff on the rapper, The Notorious B.I.G.

She had endured a number of health issues. In July she announced that she was receiving chemotherapy treatment for a recurrence of cancer, a few months after being hospitalised with a gall bladder infection. In 2018, she fractured three ribs in a fall in her Washington office. She had pancreatic cancer in 2009 and colon cancer in 1999.

She had clung to her position despite her age and health, knowing that if she retired it could change the landscape of US justice.

Her health had in recent years become a major political issue. Supreme Court justices hold their seats until they die, or choose to retire, which Ginsburg refused to do.

The vacancy left by her death could be seized upon by the Republicans: Donald Trump will now have the opportunity to appoint a third judge to the nine-member court, and could move it even further to the right.

Mr. Trump called Ginsburg an "amazing woman" and did not mention filling her vacant seat when he spoke briefly to reporters on Friday night.

READ: Make A Stand: Fashion That Gives A Damn

The court, which has a 5-4 conservative majority, includes judges Brett Kavanaugh and Neil Gorsuch, both of whom were appointed by Mr. Trump. Ginsburg had helped the court to prevent a reversal of abortion rights, stronger executive powers for the president and the growing involvement of religion in public life. She provided significant votes in landmark rulings that secured equal rights for women and expanded gay rights.

Supreme Court judges can dramatically shape US law on issues such as LGBT rights, guns, the death penalty and the powers of the president. In 1973, the court legalised abortion in the US in the landmark Roe v Wade case, and in 2015 the court voted to allow same-sex marriage.

According to US radio service NPR, days before her death she dictated a statement to her granddaughter Clara Spera: "My most fervent wish is that I will not be replaced until a new president is installed."

Despite her wish, the Republicans are poised to act. On Friday night, Mr. McConnell said he would be ready to hold a Senate vote if Mr. Trump nominates a replacement.

But Joe Biden, Mr. Trump's election challenger, said on Friday that the next president should nominate Ginsburg's successor.

Ginsburg died surrounded by her family, the Supreme Court said in a statement.

A private interment service will be held at Arlington National Cemetery, the court said.

'We can never repay what she has given us'

President Trump led the tributes to Ginsburg, calling the judge who defied him on a number of occasions a "titan of the law".

Her memory is a "great and magnificent blessing to the world", he said in a statement that he posted on Twitter:

Nancy Pelosi the Democrat Speaker of the House, said: "Tonight, the flags are flying at half staff over the Capitol to honor the patriotism of Justice Ruth Bader Ginsburg.

"Every woman and girl, and therefore every family, in America has benefitted from her brilliance. 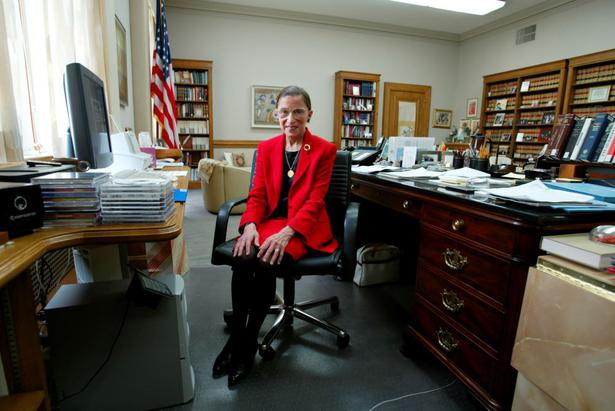 Ruth Bader Ginsburg sits in her chambers at the Supreme Court in 2002 in Washington, DC. Photo / Getty Images.

Mr. Biden, the Democratic nominee for the presidential election, said Ginsburg was a "giant in the legal profession":

Mr. Clinton, who nominated her to the court, said: "America has lost one of the most extraordinary justices ever to serve on the Supreme Court. She was a magnificent judge and a wonderful person – a brilliant lawyer with a caring heart, common sense, fierce devotion to fairness and equality, and boundless courage in the face of her own adversity.

"Her 27 years on the Court exceeded even my highest expectations when I appointed her."

Elizabeth Warren, the senator and former Democrat candidate for president in the 2020 election, said: "Ruthie was my friend and I will miss her terribly."

Justice Ginsburg paved the way for so many women, including me. There will never be another like her. Thank you, RBG.

Beyond Washington, Tim Cook, Apple's chief executive, said: "Ruth Bader Ginsburg spent her life in pursuit of an equal world. She fought for the unheard, and through her decisions, she changed the course of American history."

"We can never repay what she has given us, but we all can honor her legacy by working toward true equality, together."

Bill Gates, the founder of Microsoft, tweeted that he was "inspired by her life and legacy".

READ: Gender Equality: Are We There Yet?

British model Cara Delevingne posted a picture of Ms. Ginsburg holding up her fist and said: "Trailblazer. Icon. Legend. Role model. Fighter. The true definition of an empowered woman - this is a heartbreaking loss for us all. Please, please, please VOTE in her honour."

Megan Rapinoe, the captain of the US football team and LGBT campaigner, said Ginsburg's passing was an "incalculable loss":

The fight to replace her begins

The US Senate must confirm a nominee to the Supreme Court. The procedure to replace Ginsburg is likely to be febrile at a time of social unrest in the United States and as the Nov 3 election looms.

Ginsburg had been urged by activists to step down during Barack Obama's second term to allow him to appoint a younger liberal to replace her, someone who could serve decades on the court. 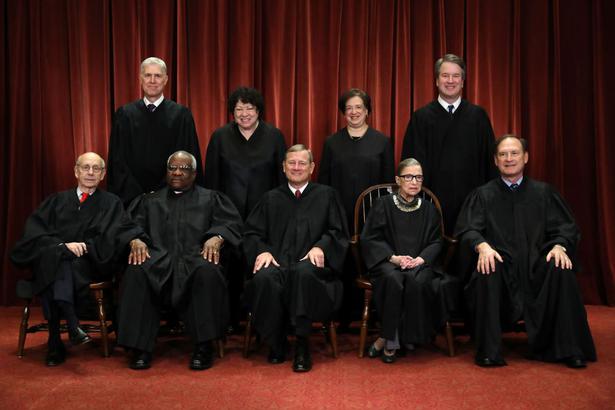 Now, Republicans have a majority in the Senate and could tip the court 6-3 in their favour.

Mitch McConnell, the Senate Majority Leader, said he would hold a vote if the president nominated a new judge CREDIT: EPA

Mr. Trump and Mr. McConnell have made moving the federal judiciary to the right a top priority.

In choosing previous nominees, Mr. Trump has selected from a list of candidates prepared by conservative activists.

During the 2016 presidential campaign, Mr. Trump promised to appoint judges who would overturn Roe v Wade.

Daniel Epps, a professor of law at Washington University and former Supreme Court clerk told Reuters that it would take about a month for the president and Senate Republicans to choose and confirm a replacement.

"I would be surprised if the president and Senate Republicans don't try to fill the seat," Mr. Epps said. "They probably have the votes."

The death of Ginsburg will turbocharge the US election, giving Mr. Trump an extraordinary call to arms to drive his supporters to the polls, The Telegraph's Nick Allen says:

If Mr. Trump were to lose, and Republicans drop seats in the Senate, the fate of his nominee would become uncertain. His message will be simple - "Re-elect me and I will give you conservative control of the Supreme Court for a generation".

But Mr. Biden will also use the issue to galvanise his voters, casting the election as the only chance to save the court from Mr. Trump.

'I had three strikes against me: I was Jewish, a woman, and a mother'

Ginsburg rose from a working-class upbringing in Brooklyn, New York, and overcame systemic sexism in the legal profession and in Washington to become the senior judge on the court.

She was born Ruth Bader in 1933 into a family of Russian Jewish immigrants. Her mother encouraged her to pursue her education before she died of cancer when Ginsburg was a teenager.

She went to Cornell and Columbia universities and at the former she met her husband Martin and had two children, Jane and James. Martin died in 2010.

Ginsburg was a top student but struggled to break into the legal profession.

"But the killer was I was a mother of a four-year-old child."

She taught at Rutgers and Columbia before working for the American Civil Liberties Union, winning cases before the Supreme Court.

She became a federal appeals court judge, before being nominated to the Supreme Court in 1993.

Ginsburg was seen by many as an inspirational figure.

Her exercise regime was turned into a workout book and she inspired Ginsburg Halloween costumes. Clips of her lifting weights became a popular meme.

Shana Knizhnik, one of the creators of the Notorious RBG blog, said her appeal crossed the generations.

"She's fought for ideals that even today may seem pretty radical, and at the time were simply unheard of," Ms. Knizhnik said.

The 2018 legal drama On the Basis of Sex told the story of her battles against sexism in the American legal system. RBG, a documentary about her career, was nominated for an Oscar.

How she defied the president

Even with a 5-4 conservative majority on the court, Mr. Trump lost several key rulings this year, including a decision that rejected his claim of presidential immunity from criminal investigation.

The court also ruled against Mr. Trump by expanding LGBT rights, struck down a Louisiana abortion law and blocked him from repealing an immigration scheme set up by the Obama administration.

But Ginsburg's replacement will be nominated by Mr. Trump, a man she attacked for his "ego" and whose impact on the court she said she did not "even want to contemplate".