It was a busy day for the topiary. Down Villa Gamberaia’s manicured garden paths came a band of manicured men, dressed in fluorescent expressions of hot pink and bright orange, blue and jewel-toned green. Against the 17th-century Tuscan villa’s cypress hedging and a dark, clouded sky, Jil Sander’s spring 2011 menswear collection looked shockingly artificial, like a fever dream cut with a touch of tailoring.

Designed by the brand’s then creative director Raf Simons, the “tribute to the vibrancy of extreme tropical nature” had onlookers walking away feeling changed in some way, by more fun, more saturated forces.

Months later in New York, in the wake of the Great Recession, which reached its end in 2009, Raf’s call to colour — a revolt by one of fashion’s master minimalists against the sparseness and severity of the late noughties — reverberated throughout Fashion Week. 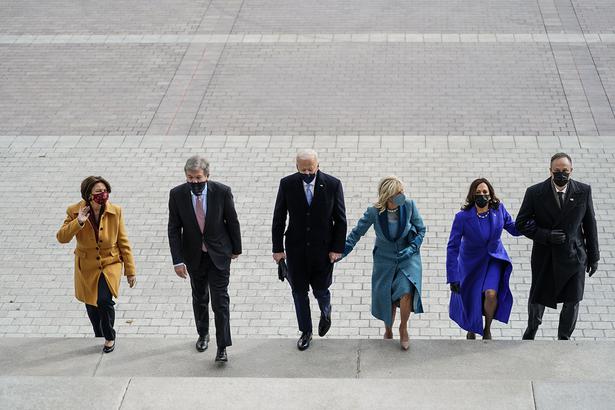 Raf, too, furthered his exploration of the synthetic colour-blocking shown at his Jil Sander menswear show with a womenswear offering that proved to be even more influential, described later by commentators as fostering a seismic shift in fashion.

Called ‘Techno Couture’, the collection was poetically described by Raf as a “mille-feuille of colour”, combining frothy couture silhouettes with intense unnatural shades, and man-made fabrics made to hold the hyper colour. Instead of a background of topiary, this was presented in a stark white room, putting the shocking colour into even sharper focus.

But the jubilance was just as palpable; the statement of intent — an about-turn, masked as a confetti cake — was too.

Fast-forward a decade to 2021, and fashion has felt a similar embrace of energetic, effulgent everything. London-based brand Roksanda’s spring 2021 collection was raucous and marvellously blocky; Molly Goddard, Britain’s reigning doyenne of the best kind of frothy, tulle-spun smocks, presented energetic looks of checkerboard neons and zingy gowns; while Miuccia Prada, for Miu Miu, drew on polarity, coupling sporty-chic bowling jackets and knee-length skirts with layer upon layer of chipper hues. 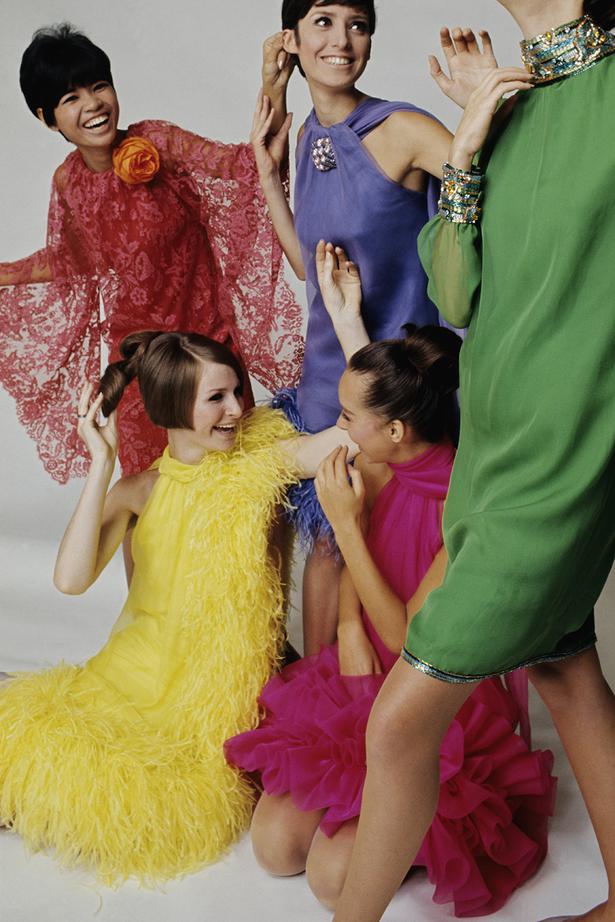 Local designers also received the “wear colour” memo, from Zambesi’s sheer overcoat in a delicious shade of “candyfloss” to Paris Georgia’s slick acidic orange and lemon sorbet tailoring. Layplan’s ethos is based around “loveliness and boldness”, with racks of candy-hued dresses; Maggie Marilyn is known for its regular and clever use of pink and other unexpected shades (right now designer Maggie Hewitt says she’s into pistachio green and chocolate brown).

The forging of the present from the past is nothing new, yet in the face of an unknowable, post-pandemic hinterland, marked by varying degrees of hardship and unease, there’s assurance to be found in something familiar.

Especially when that “thing’s” essential experience feels like a corrective, and when you indulge in a few parallels along the way (read: 70s-inspired denim, sweater vests and exuberance; the fashion world courting Tavi Gevinson, who, as a lead in this year’s Gossip Girl reboot, steps once again into the eye of the sartorial storm; and a world gearing towards recovery). 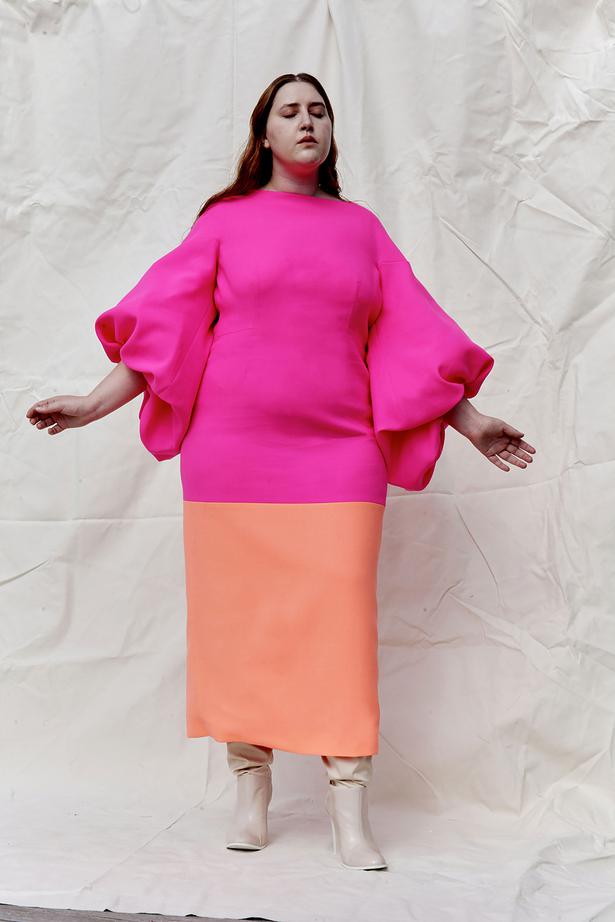 As The Guardian fashion editor Jess Cartner-Morley made her wish back in 2010 — “I want clothes that conjure up those first days in March when the sunshine turns lemony” — so 2021 answered, on Inauguration Day in the US, with its own form of sunbeam: Amanda Gorman, with her poetry and Prada, resulting in a profound sense of upliftment and a 1328 per cent rise in searches for “yellow coats”, according to Lyst.

“The result was purposeful, collaborative, and coherent,” observed Rachel Symes for The New Yorker. “We are not used to seeing political figures working together on something as simple as colour-blocking.”

Fittingly, many of 2021’s collections from both local and international designers can be measured by their simplicity. Pragmatism is their base, and a return to the essential, their end-goal.

“It’s not genius, it’s obvious,” MSGM’s Massimo Giorgetti told Vogue of his spring collection, a sentiment echoed by Pierpaolo Piccioli of Valentino when talking about his recent couture collection. “The narrative of the collection is the collection itself. No stories. Nothing figurative. I wanted to work on surfaces, not in a decorative sense, but workmanship which becomes the surface itself.”

It’s reduction, if not reversion, on their own terms, where colours are celebrated at their most elemental and fanciful.

READ: Colour Your Life With These Bold Styles This Autumn

This electric Kool-Aid acid colour test could also be interpreted as a rejection of Instagram’s hyper-curated, minimalist, black-white-and-beige aesthetic (the one that sucks any hint of green out of a photo) — and a shrugging off of New Zealand’s old-school black-clad “don’t look at me” stereotype.

Kate Sylvester, who has a long history incorporating off-beat block colour into collections, says boldly hued options now regularly outperform and outsell those in black. “Green is an absolute favourite, it suits lots of complexions, it’s easy to outfit and is a great alternative to black. But often a bold, unexpected colour will surprise me, like a vibrant lavender or turquoise that someone completely falls in love with to brighten up their wardrobe.” 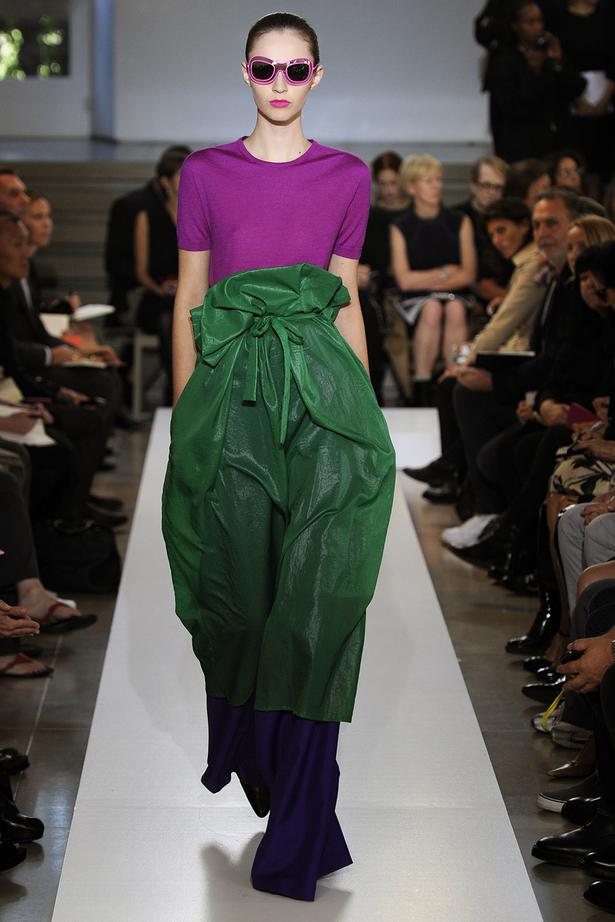 For her winter range, called ‘Sisters’, Kate hoped to express a positive, uplifting energy that translated through warm pinks, a striking turquoise, coral and tobacco. “I wanted the collection to feel like a big hug: safe, warm and reassuring.”

When The Guardian’s Jess Cartner-Morley arrived at New York Fashion Week over a decade ago, she was witnessing a shift. “Fashion was having a moment, and not in a good way,” she wrote. “It was having a why-are-we-all-here, what’s-the-point-of-it-all moment.”

Sound familiar? That current style has rebuked an identical existential crisis with, in many ways, the same sort of sensational, escapist pleasure, one Cartner-Morley noted had “the colours of the kind of holiday cocktails that come with a pink umbrella and two straws”, has the illuminating effect, for wearers, of telling a similar but nonetheless different story.

The wearer — maximalist, minimalist, maximalist-minimalist — must now choose how they show their mettle.